Home  ·  Stories  ·  All the Accumulated Wealth of Knowledge 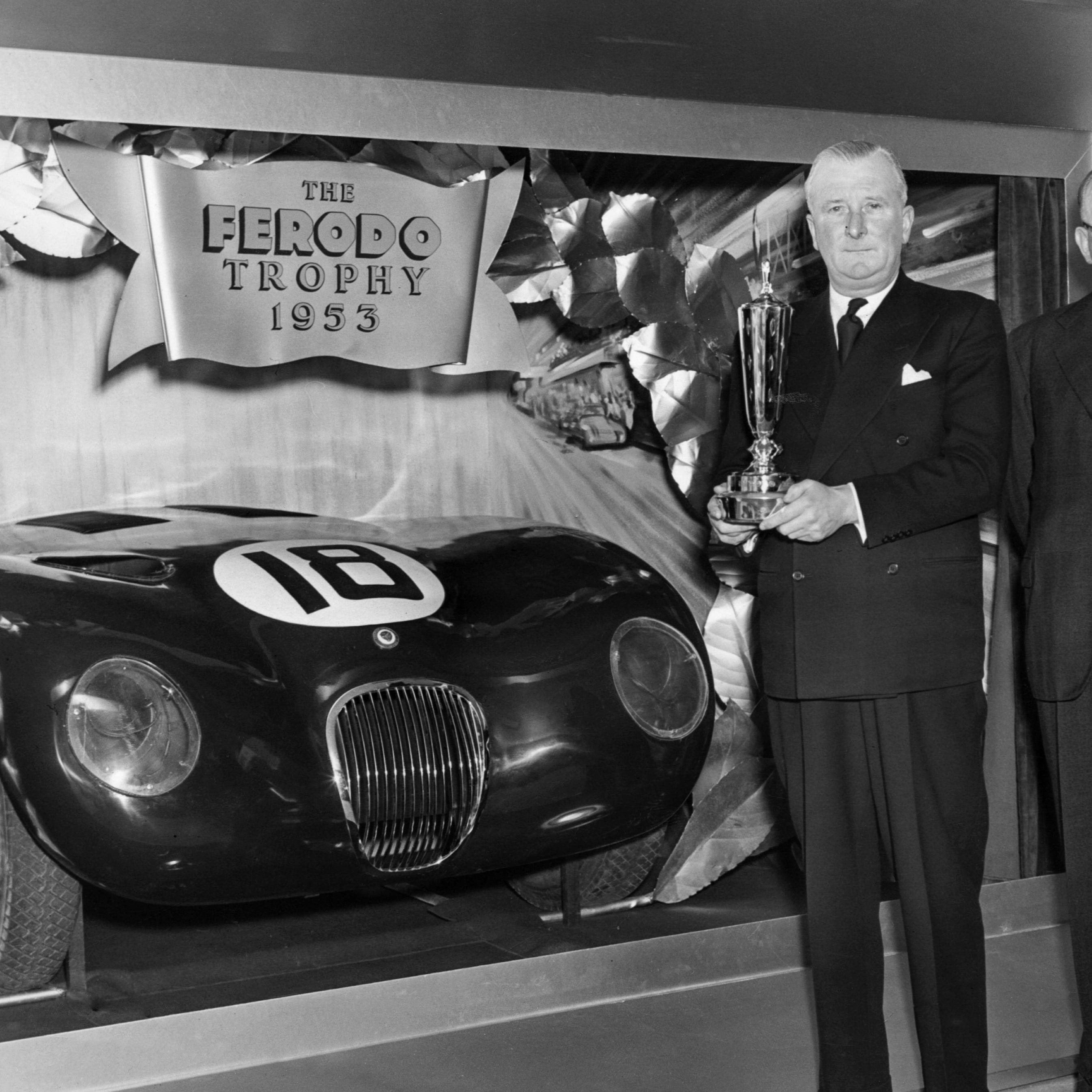 All the Accumulated Wealth of Knowledge
"By victory after victory on the racetracks of the world, Jaguar has gained for itself a position in the very forefront of modern sports cars." - Jaguar Cars Ltd, Coventry England
In 1901, at the dawn of automotive ubiquity, William Lyons was born at the right time. A hands-on visionary from the start, Lyons purchased his first motorcycle at the age of thirteen. Although too young to ride, Lyons methodically dismantled, studied, and re-assembled (with improvements) his 1911 Triumph motorcycle. It is worth mentioning that he went on to sell this bike at a profit. Thus becomes the pattern of Lyons’ professional life.

During World War I, Lyons apprenticed at Crossley Motors in Gorton, Manchester, in conjunction with studying engineering. Later, he worked at a new motorcar dealership, Brown and Mallalieu. It was here that Lyons learned how cars were made and how they worked. He had the opportunity to work with customers and learned how to close a sale.

In 1921, William Lyons met fellow motorcycle enthusiast, William Walmsley. Walmsley, similarly wired as Lyons, had designed a sidecar and was, in fact, building some in the garage behind his home. By September of 1922, Lyons and Walmsley had formed the Swallow Sidecar Company. The company employed a half-dozen employees and was soon producing ten sidecars per week. 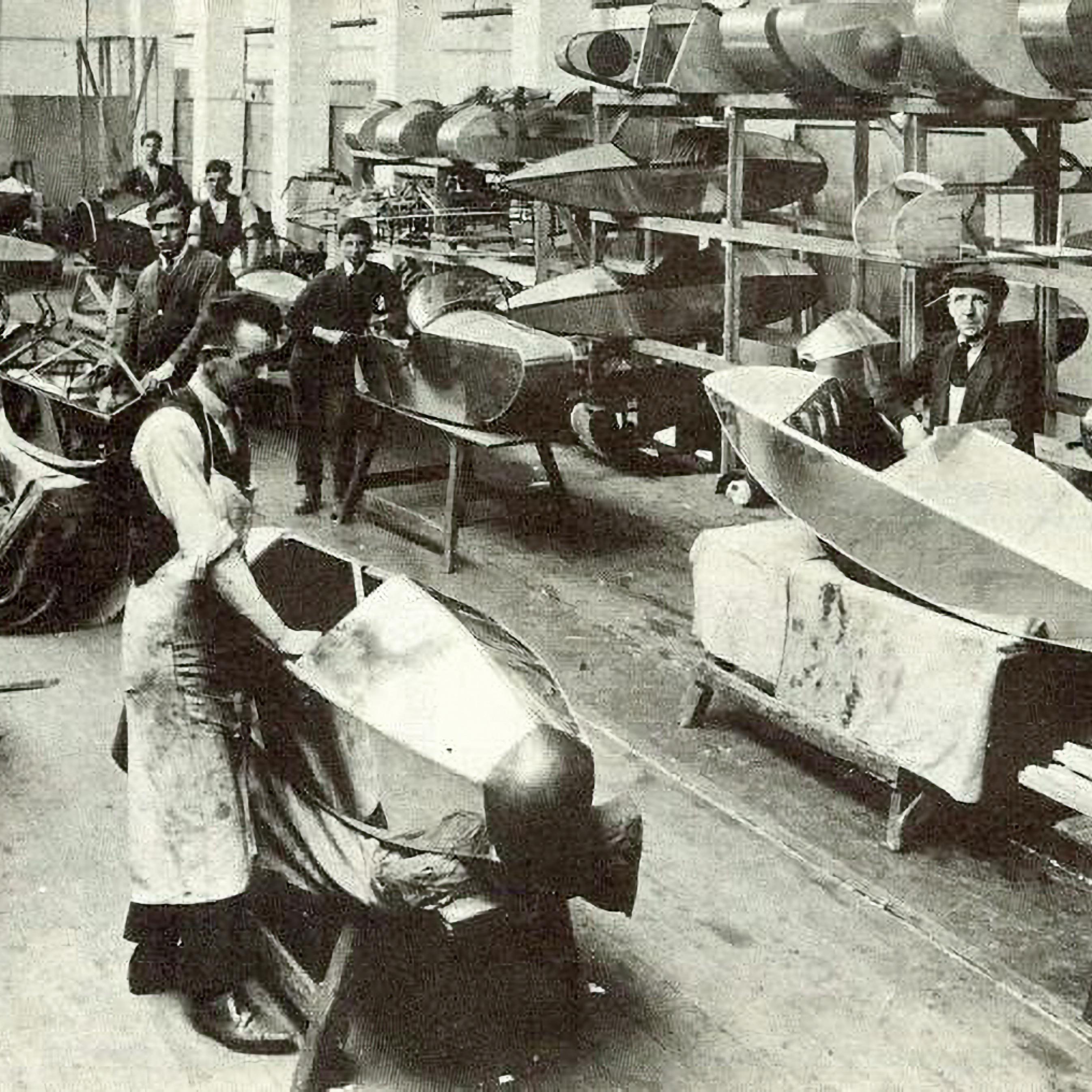 Photo of the Swallow Sidecar workshop.
The emergence of inexpensive and small mass-produced cars began cutting into the market share of the Swallow Sidecar Company. Lyons wanted a piece of this new market. He envisioned a more refined vehicle than what was, at that time, being offered. In due course their company sign read, “Swallow Side Car & Coach Building Co.” The company went on to produce small coach-built cars, using an Austin chassis and engine to create the Austin Seven Swallow. Although this vehicle was well received, Lyons aspired to design and build a car from the ground up. He hired a team of skilled engineers to realize his vision of a custom hand-built car, the first iteration of which was the S.S.1 in 1931. Continually seeking increased performance, Lyons instructed his engineers to design a more powerful engine for a subsequent line of cars named S.S. Jaguars. In 1933 the company name was changed to SS Cars, Ltd. The first “Jaguar” was offered in 1935.

With the retirement of William Walmsley, Lyons purchased 100% ownership and thus, control of the company. During World War II, the company primarily focused on war efforts. Vehicle production was switched to aircraft manufacture and repair. Engineering development, however, continued. Lyons and his team worked on a new engine which was to power his vision of a mass-produced sporting saloon car. After the war, Lyons changed the company name to Jaguar Cars Limited as, “unlike S.S., the name Jaguar is distinctive and cannot be connected or confused with any similar foreign name.”

In 1948, the XK engine was ready. It was launched in what Lyons and his team thought would be a one-off concept sports car, the XK120, for the purpose of drawing attention to the new XK engine. The supposedly limited production model was shown at the first post-war London Motor Show in 1948. It became a global sensation. Americans ordered in quantity. The demand was so strong, however, as a result of the recent war, steel was in short supply. Production was slow, but Lyons pushed for a larger steel allocation. Once the XK120 was in production, Lyons again focused on vision and design.

Lyons had panels made to his specification that were then offered up to a mocked-up pattern already in place. As usual he looked at the way the light fell on the curves of the car; using string, wood and metal rods he would fine-tune the shape until he was happy. - Jaguar Heritage Trust 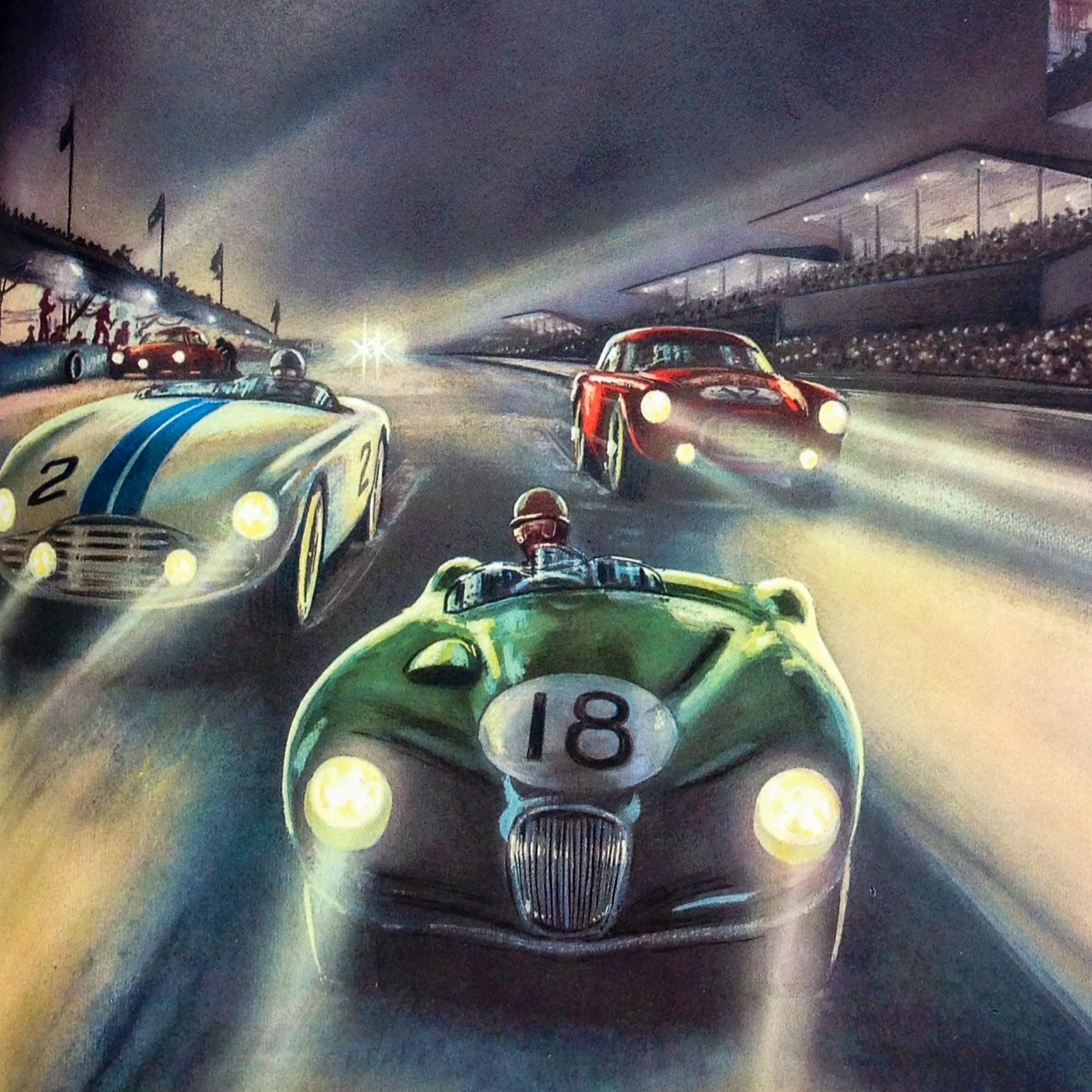 The winning Tony Rolt/Duncan Hamilton of the Jaguar C Type ahead of Phil Walters/John Fitch Cunningham of the Chrysler C5R and Alberto Ascari/Gigi Villoresi of the Ferrari 375MM at Le Mans, June 13th-14th, 1953. Artwork by Max Staub.
The beauty of the XK120 had captured the imagination of the public. Lyons needed to confirm its performance. Opportunity presented itself in 1949 when Lyons entered three XK120s into a Production Sportscar Race sponsored by a newspaper no less. Two of the three vehicles took first and second place. Other races ensued; however, it was Le Mans that Lyons had set his sights set on. After disappointment in 1950, Lyons authorized the design and build of a special racing model for 1951. Engine modifications and aeronautical inspired body styling were examined, explored, and employed. The resulting design was the XK120 C-Type (C for Competition). By 1954 Jaguar had achieved three consecutive wins in the 24 Hours of Le Mans.

The six-year lifespan of the immensely popular XK120 provided a very high standard upon which Jaguar improved upon when they released the XK140. New features included, no surprise, more power. The optional MC performance package, such as in the 1955 Jaguar XK140 MC Drop Head Coupe offered in the upcoming Luxury & Collector Vehicles Auction, used the C-Type’s competition cylinder head, producing up to 210 brake horsepower. Other refinements included disc brakes, rack and pinion steering, increased suspension, more interior room, sturdier bumpers, and a tougher grille. A medallion on the trunk lid proclaimed, “Winner Le Mans 1951-3.” The XK140 proved to be even more successful than its predecessor.

All the accumulated wealth of knowledge and experience gained in the hard school of racing have been built into new Jaguar XK140 models…the Jaguar characteristics of smoothness, silence, tractability and road adhesion are such that complete and effortless mastery is in the hands of the driver at all times and at all speeds. - Jaguar Cars Ltd, Coventry England 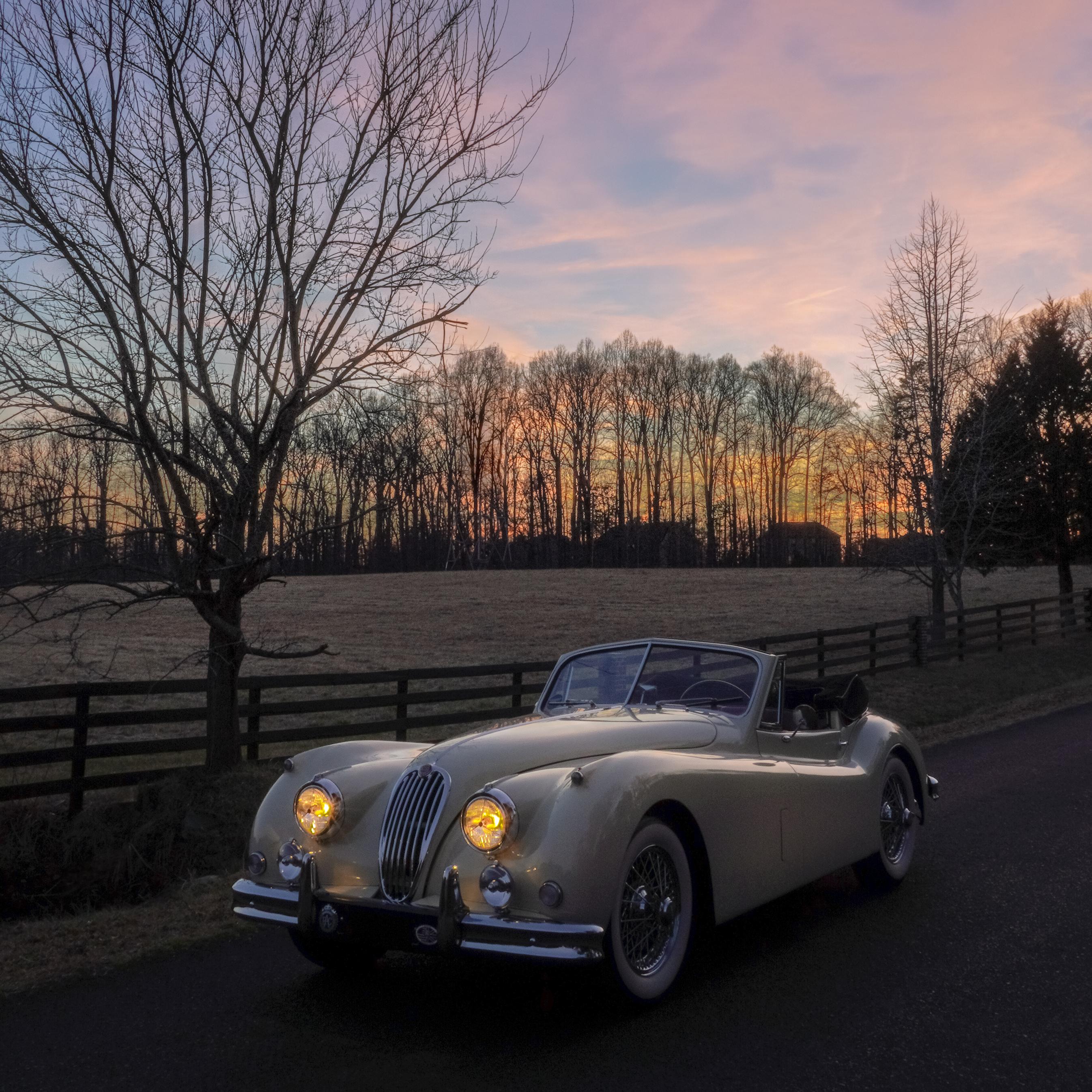 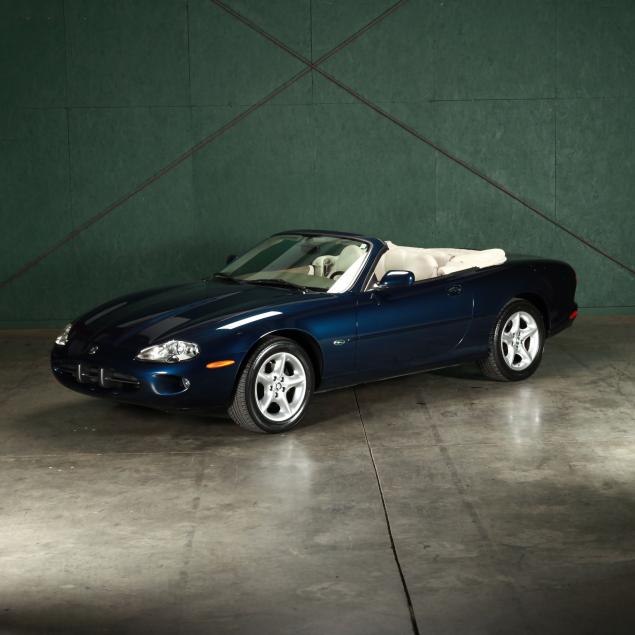