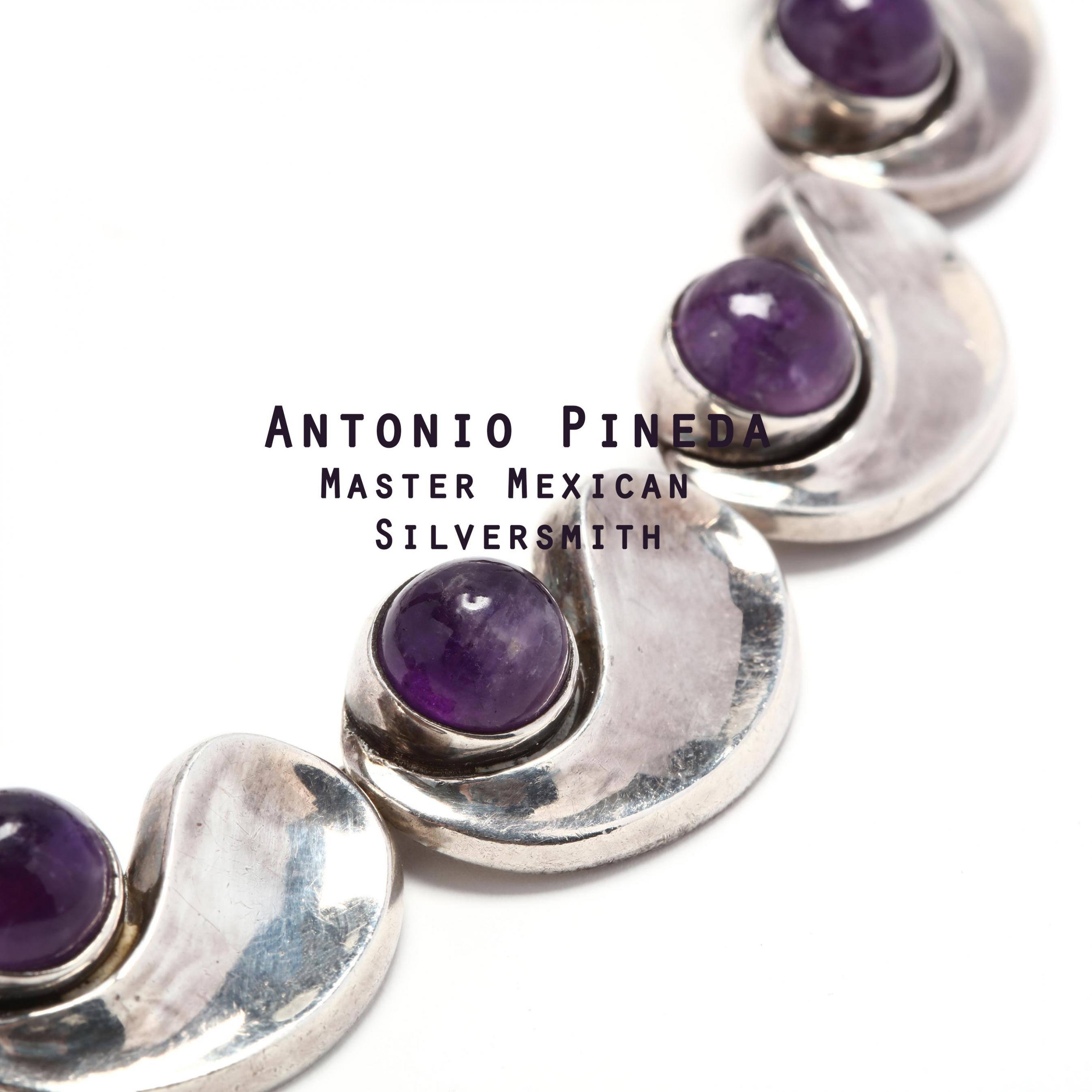 Throughout history, it has always been the culture-makers who reshape the national spirit after times of crisis. In Mexico in the 1920’s and 30’s, in the wake of the the Mexican Revolution, artists and artisans rediscovered the aesthetic of their pre-Columbian heritage and turned it into a mid-century movement. Antonio Pineda, several of whose silver pieces are included in our auction of Fine Jewelry, was one of the Mexican artisans of the early and mid-20th century whose dramatic silver jewelry drew the attention of Hollywood stars and American socialites.

Pineda was a member of the Taxco School of silversmiths, which developed out of the workshop of American architect William Spratling. Spratling taught architecture at Tulane University and spent his summers in Mexico in the 1920s. In 1929, he moved to the little historical silver-mining town of Taxco permanently. Using money he earned arranging commissions for his friend Diego Rivera, Spratling set up a silver workshop called Taller de las Delicias. Spratling recognized the dormant economic potential of Mexican silver, and used it to revitalize Taxco. Like Rivera and other Mexican artists in the aftermath of the revolution, Spratling rejected the European Art Nouveau style that dictator Porfirio Diaz had insisted on for decades. Instead, Spratling drew on mesoamerican themes from pre-European conquest. 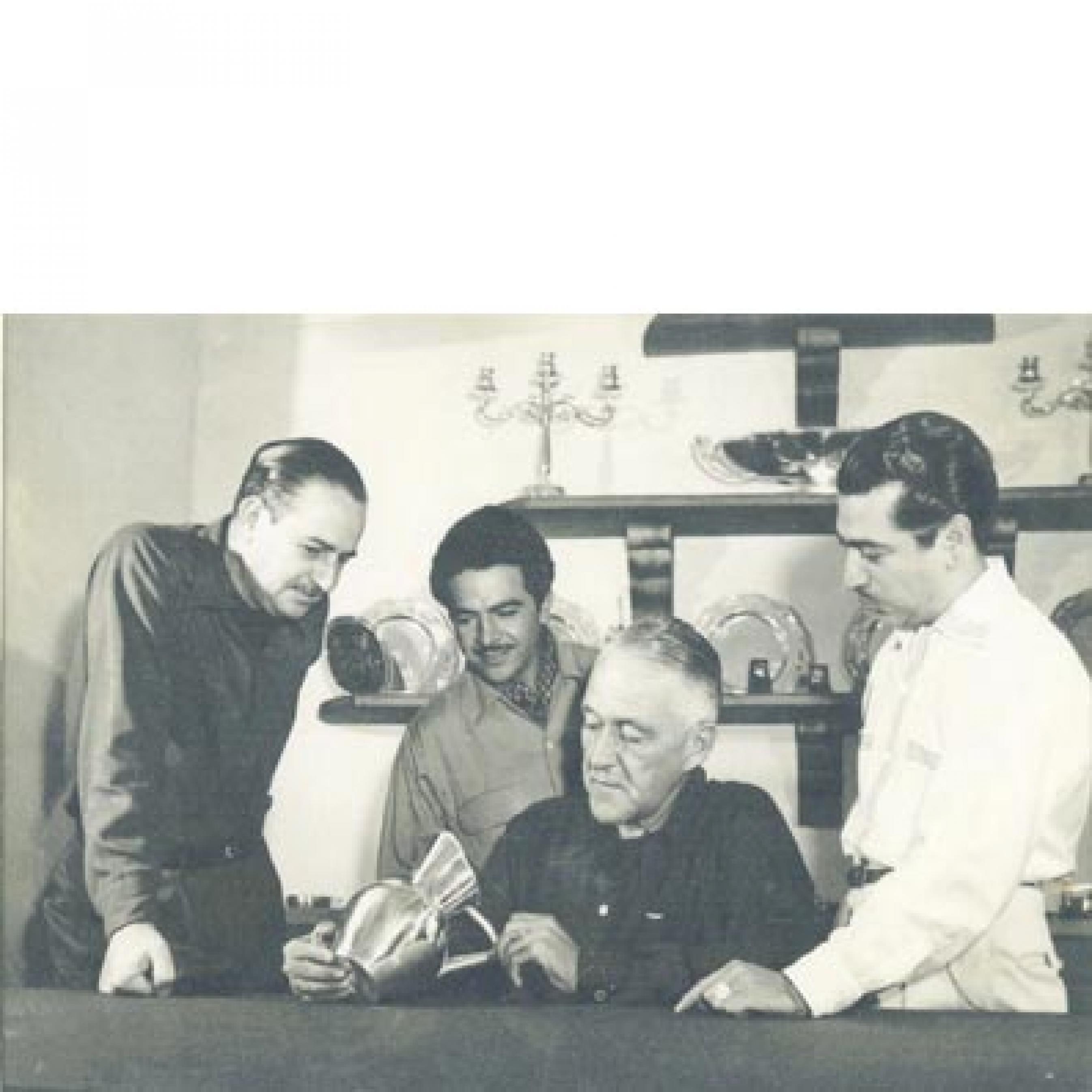 Photo by Juan Guzmán of Héctor Aguilar, Antonio Pineda, William Spratling, and Antonio Castillo, c. 1955. Collection of the Latin American Library, Tulane University
Spratling hired a number of local gold and silver-smiths to work in his shop. One of them was Antonio Pineda, who started with Spratling as an apprentice at 11 years-old. Pineda and several others who worked for Spratling eventually left the Taller de las Delicias and opened their own shops. Because these apprentices promised Spratling not to copy his designs, they were forced to grow creatively, and each developed his own distinct style.

Pineda opened his own taller in 1933, just as Taxco was becoming a popular spot for American writers and other intellectuals.
By the late 40’s and 50’s, Taxco had attracted vacationing American movie stars and elites, all with an appetite for Mexican silver jewelry, which they took back home with them to the United States. In 1944, The Legion of Honor in San Francisco mounted a show of Mexican silver, including a number of pieces by Pineda. Richard Gump, the heir of the Gump’s retail store in San Francisco, admired Pineda’s work and bought his entire collection to sell at the store. Gump subsequently became the exclusive retailer of Pineda’s work in the United States. 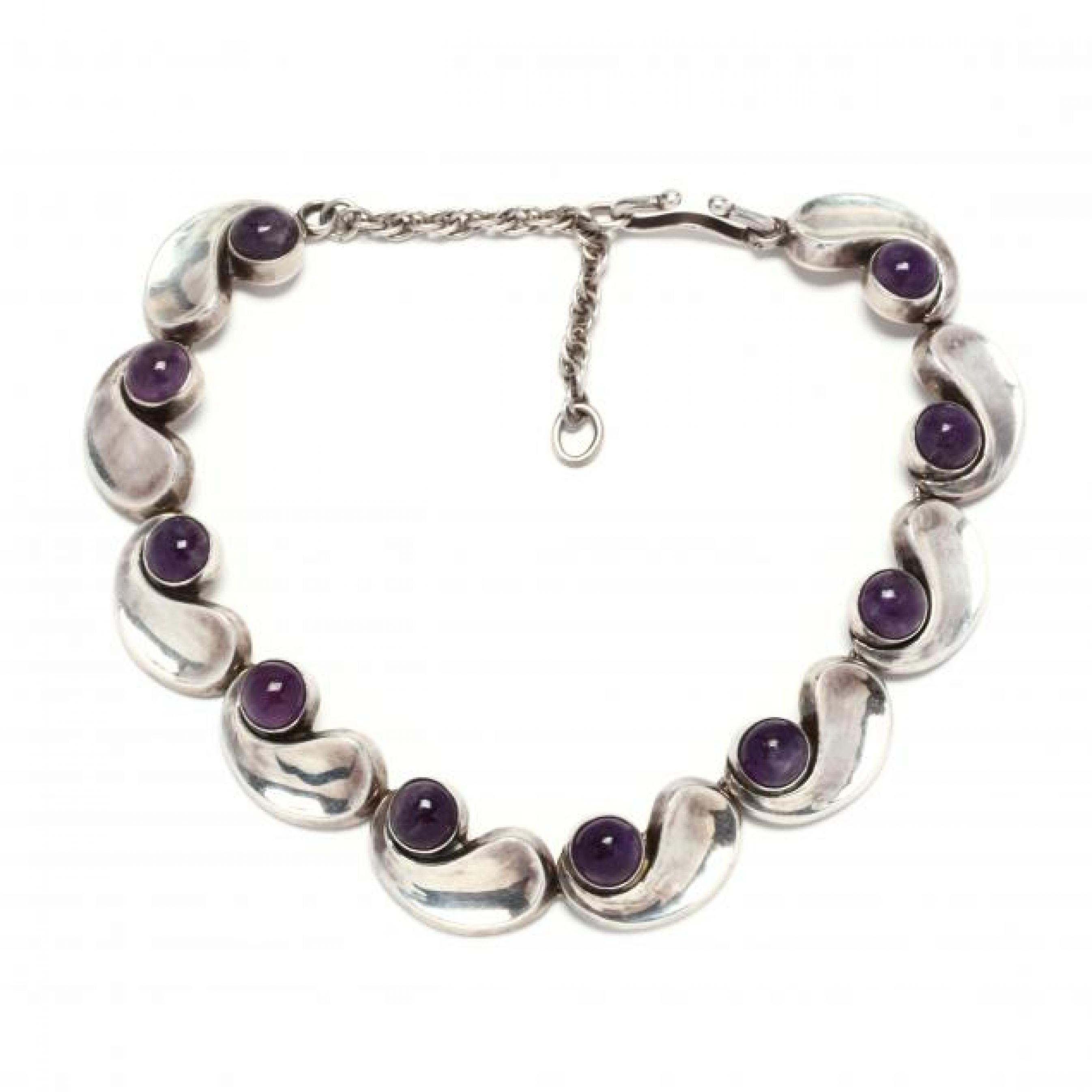 Silver and Amethyst "Comma" Necklace, Antonio Pineda
It was thanks to Gump’s involvement that Pineda became known for incorporating rare stones into his silver pieces. Because of the extremely high temperatures necessary for working with silver, working stones into silver designs is challenging. But Gump would buy Pineda the stones and encourage him to experiment with them. Pineda developed methods for suspending stones in silver with as little metal touching the stone as possible - making for a highly architectural, gravity-defying style.

Pineda’s work evolved over the years from pieces that drew heavily on the ancient Mexican aesthetic to a more sculptural style that evoked Art Deco. His jewelry was always substantial - he felt it important that the wearer feel the weight of the metal. At the same time, he prided himself on the comfort of his jewelry. He made necklaces and bracelets that looked almost immovable but were engineered with ingenious faceting and hinges that made them fit a woman’s body gracefully and comfortably.

Over time, Pineda hired his own apprentices, whose creative input took Pineda’s work to yet another level of ingenuity. At his peak, Pineda employed 100 silversmiths to execute his designs. His work became popular internationally, and he branched from jewelry into sculpture, which he exhibited in Chicago, Paris, London, Rome, Amsterdam, and Mexico City. Just before Pineda died in 2009, the Fowler Museum at UCLA showed an exhibition of his work.
But for all his global renown, Pineda was always a son of Taxco, and the aesthetic that he developed with the other members of the Taxco School became visual shorthand for contemporary Mexican style. 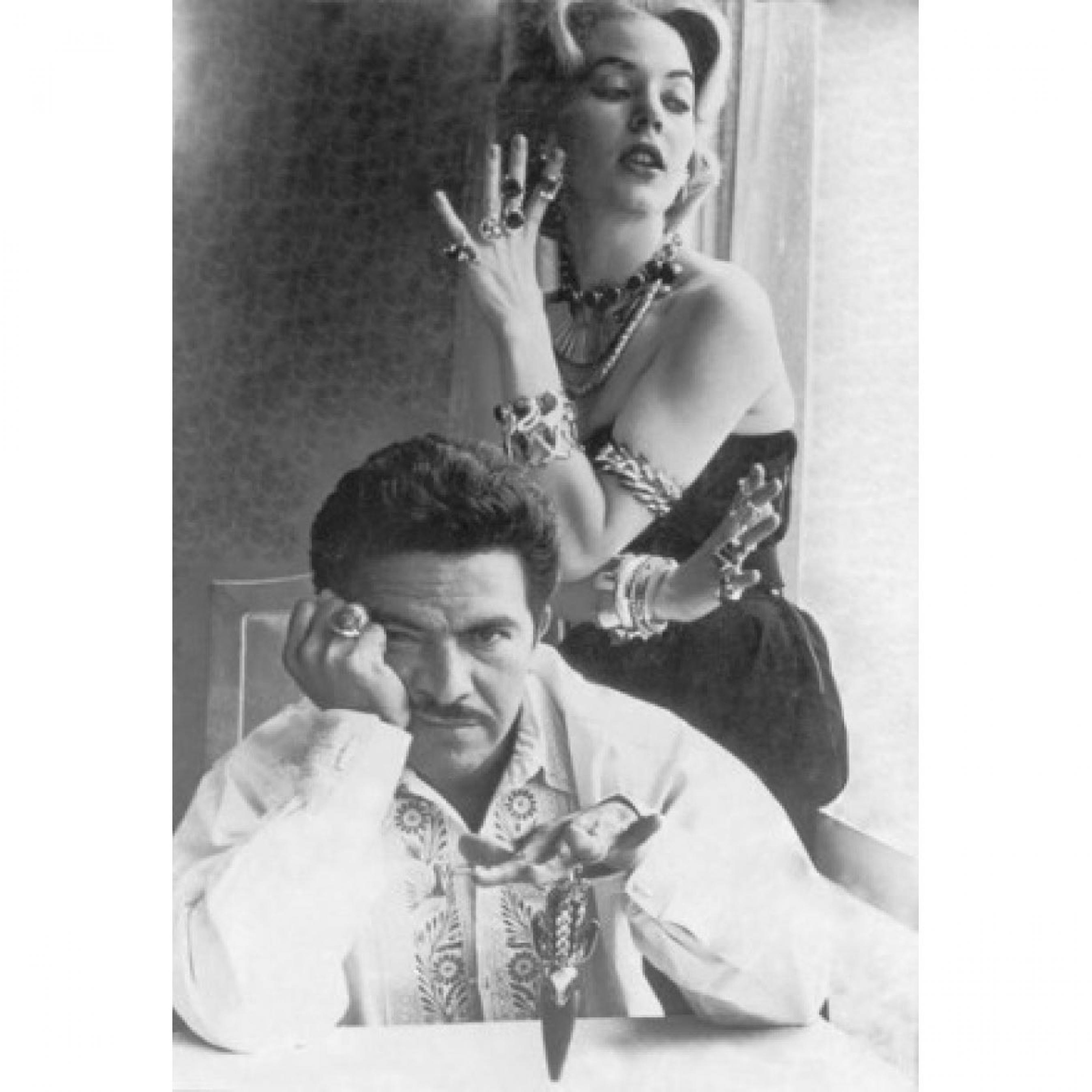 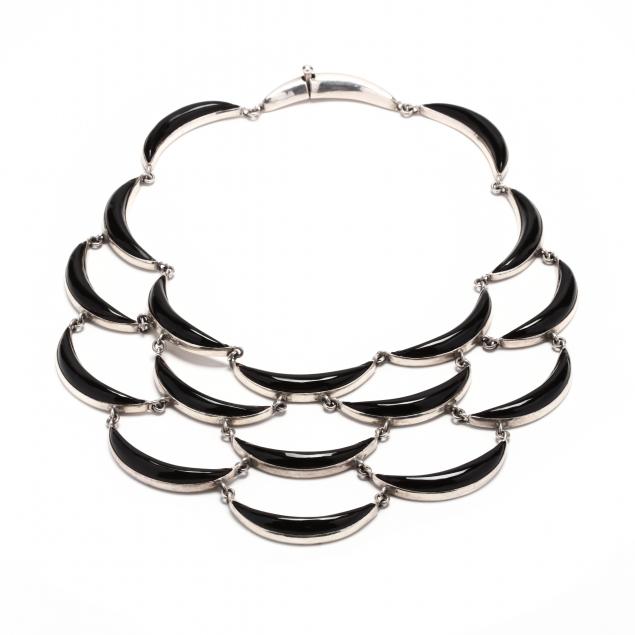 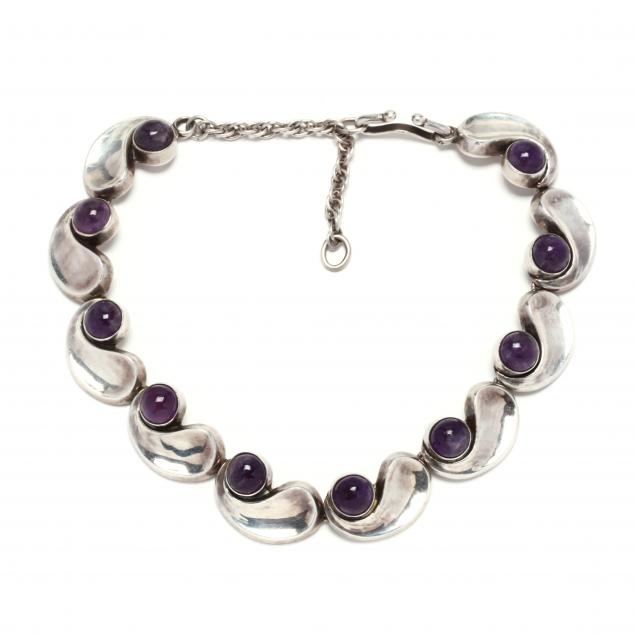