Without a professional sports organization to memorialize it, America's first gold rush is often overshadowed by its Western cousin. The first actual discovery of gold in the continental United States was in North Carolina in 1799. It precipitated a gold industry that produced some of the most valuable collectible coins that exist today. Here are some points of interest about the gold rush and the Mint that was built to accommodate the ensuing influx of wealth.

To the Truant Go the Spoils

One Sunday morning in 1799, 12-year old Conrad Reed skipped church and went instead to mess about in the creek on his family's farm. He turned up an interesting yellow rock that he took home to his father. John Reed, Conrad's father, was a former Hessian soldier who deserted the British Army during the Revolution to stay on and make a life in North Carolina. The family used Conrad's find from the creek as a doorstop for several months before a local jeweler recognized its worth and bought it from them for a week's farming wages - $3.50. It turned out to be a 17lb gold nugget worth $3600. The Reeds hastened to make use of their newfound assets and eventually grew rich off the contents of their creek and farmland.

The earliest period of the North Carolina gold rush was mainly the product of farmers surface mining in the stream beds on their properties at the end of the growing season. But as these surface deposits of gold were depleted, more advanced mining techniques were required. Enter a community of miners from Cornwall, England, where the local mines had been sapped. They brought to the United States advanced mining knowledge that would eventually contribute directly to the success of the California Gold Rush, as the by then seasoned miners of North Carolina went West.

Ironically, much of the gold first mined in North Carolina was traded back to England, simply because it was easier to put it on a ship than it was to risk the overland trip to the Federal Mint in Philadelphia. The British then sold the gold back to the United States at a premium. President Andrew Jackson recognized the disadvantage in that arrangement and authorized the building of a new branch Mint in Charlotte, along with two others in New Orleans and Georgia. The Charlotte site minted gold coins exclusively.

The West and the War

A large part of why coins from the Charlotte Mint are now so collectible is that there were relatively few of them produced. The Mint only operated from 1838 to 1861, and its production during that time waned as mining interest was drawn off to California. The Mint was seized by the Confederacy after North Carolina seceded in 1861, and as the Confederates developed their own currency they quit minting gold coins. The Mint was used as a Confederate headquarters and hospital during the Civil War and was never returned to operation.

All gold coins minted at the Charlotte Mint are marked with a "C". There are likely only a few hundred survivors of the 1851 $5 Liberty coin, of which we are lucky to have one in our April Coin Auction. This particular coin has a lovely reddish tone, sometimes apparent in gold coins minted in the United States, where slight amounts of copper were used to help the softer metal withstand the rigors of circulation. The coin in our April sale is in "almost uncirculated" condition, and is new to the market from a family with deep roots in North Carolina. Just like the miners that dug its raw materials out of the ground, this coin made a trip to California - in this case to be reviewed for auction. According to our coin specialist, Rob Golan, that may well have been the coin's first trip out of North Carolina since its minting. 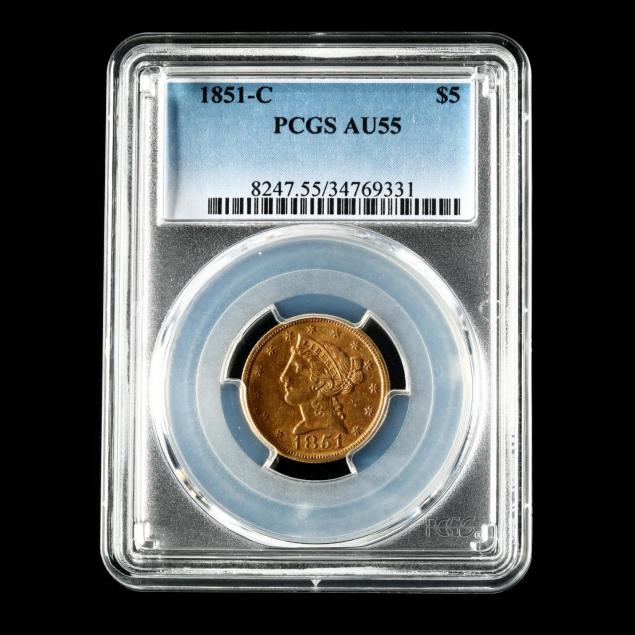