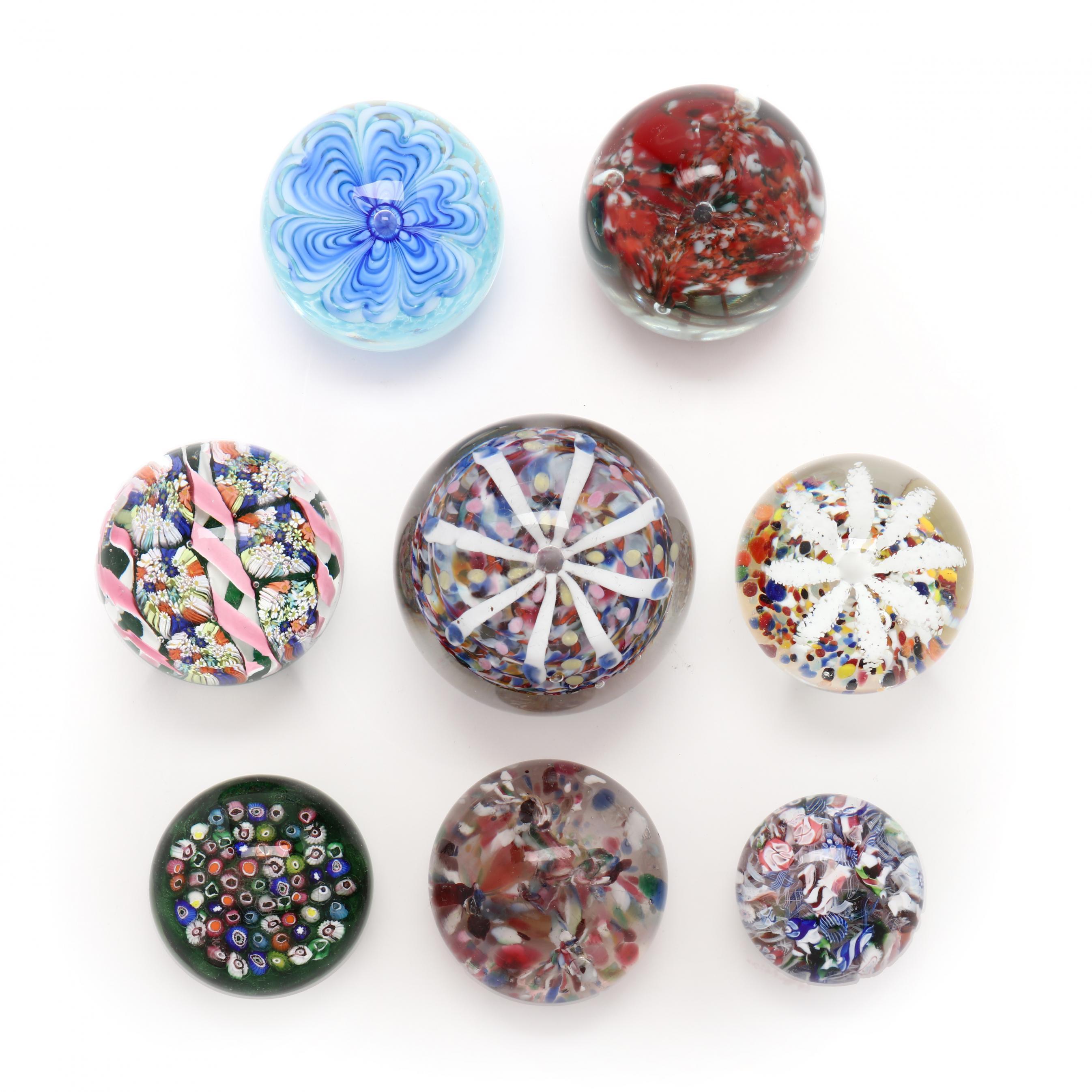 Paperweights: A Purposeful Art
The earliest known decorative paperweights appeared in Europe in the 1840s. Designed for the singular purpose of holding down stacks of paper on desks, paperweights were a response to the evolving needs of mid-nineteenth century life. 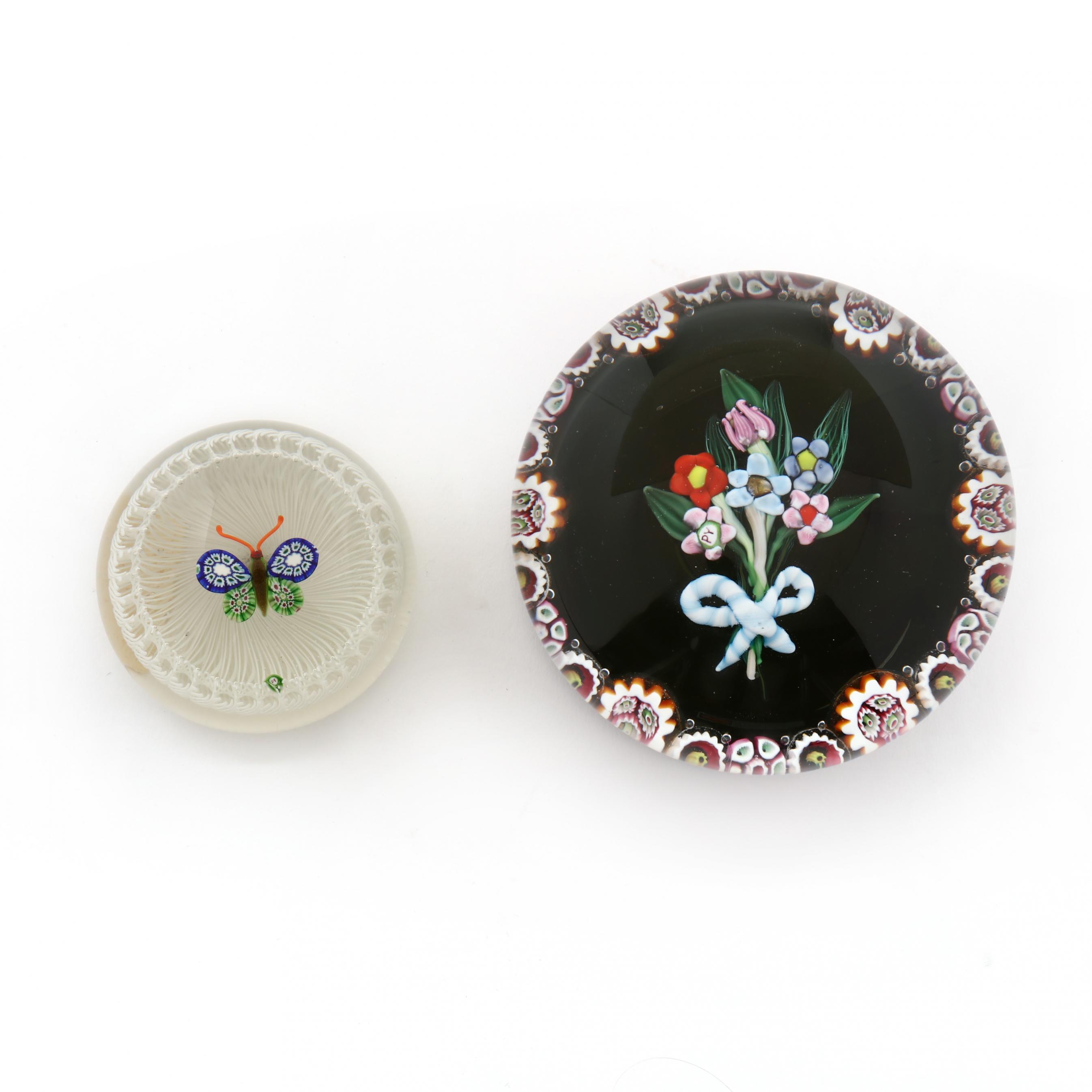 Signed Paul Ysart paperweights.
The industrial revolution created an expanded market of goods, making paper (along with many other items) more widely available due to decreased production costs. It also created a growing pocket of leisure time (for some), focusing on fashionable interests such as letter writing. The first stamps were being printed at this time, bolstering the practice of sending paper mail. Since then, paperweights have become highly collectable objects of art, with particularly spectacular examples selling for hundreds of thousands of dollars.

Leland Little is proud to offer a curated selection of paperweights in our upcoming June Estate Auction from the Collection of the late Dr. & Mrs. Henry C. and Barbara Landon III of Wilmington, North Carolina.

Paul Ysart was a Spanish master craftsman who began making paperweights in the 1930s and continued to do so until his retirement in 1979. Paul learned the art of using millefiori canes in his paperweights from his father Salvador, who used them in the 1920s as part of his glass-blowing centric art. Millefiori comes from the Italian word which means “a thousand flowers.” The millefiori technique can be shown along the edge of the paperweight shown on the right. The bouquet of flowers itself is a technique known as “lampwork” which Paul Ysart was extremely well known for. 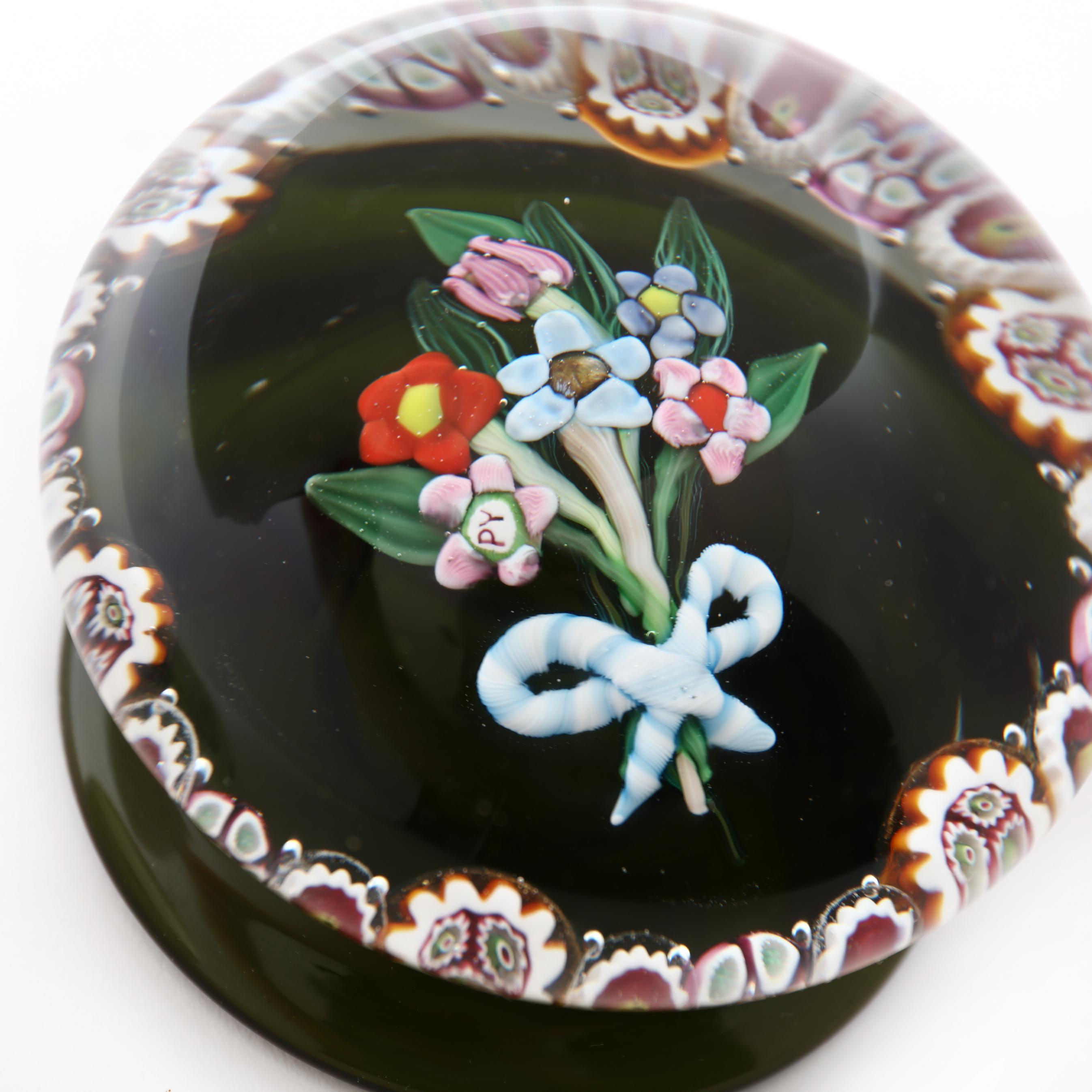 “PY” signature can be seen in the farthest left flower.

Paul signed his initials within a cane “PY” and that can be shown in both of these examples. The “PY” signature was used throughout Paul’s career - and used exclusively between 1955 and 1970. In 1971, his cane signatures bore the letter “H.” The clear glass also indicates these were made after 1950, older models having had various degrees of “darkness” to the glass. 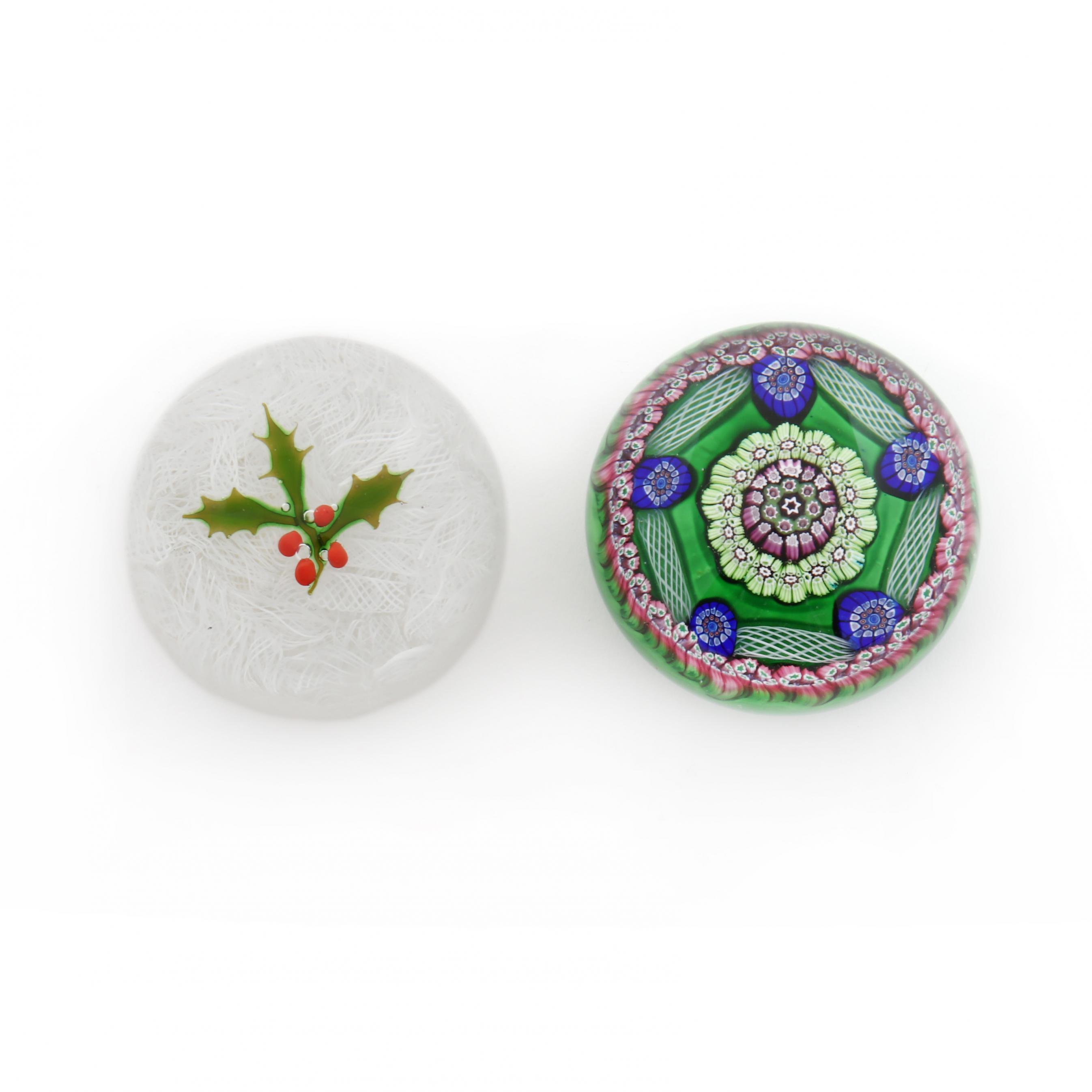 Lampwork holly sprig and berries on left, and a millefiori example on right.
Perthshire began in 1968 in Crieff, Scotland by Stuart Drysdale. Drysdale assembled a team of the finest glass artists and among them was Jack Allan, who had studied under Paul Ysart’s father, Salvador, and became their most celebrated artist. It was Drysdale's mission to create paperweights of the highest quality to rival the best examples of the 19th century. Perthshire closed their doors in 2002 but collectors still clamor for their one-of-a-kind pieces. 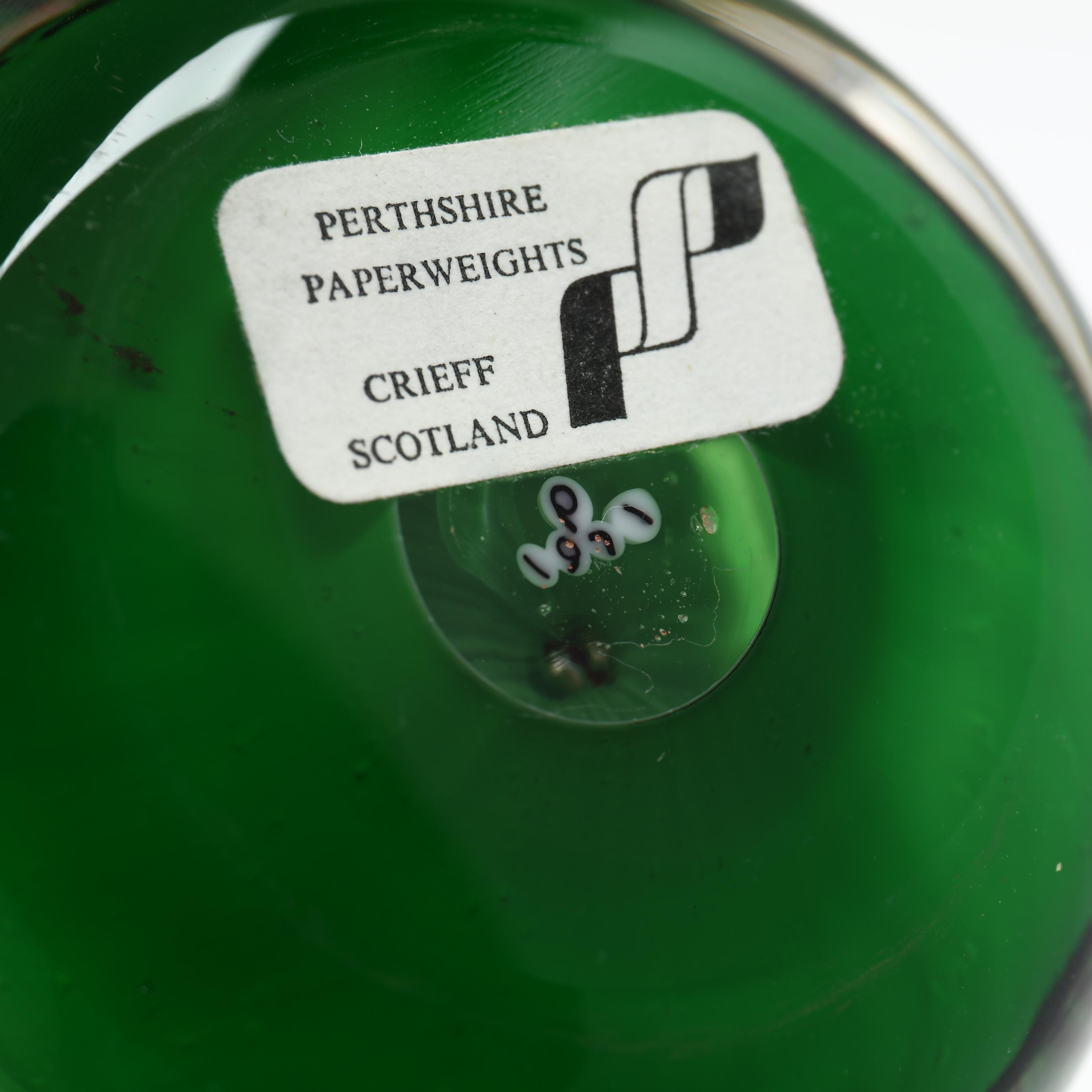 Original label from Perthshire in Crieff, with small canes indicating “P” for Perthshire and the date of creation, “1971.” 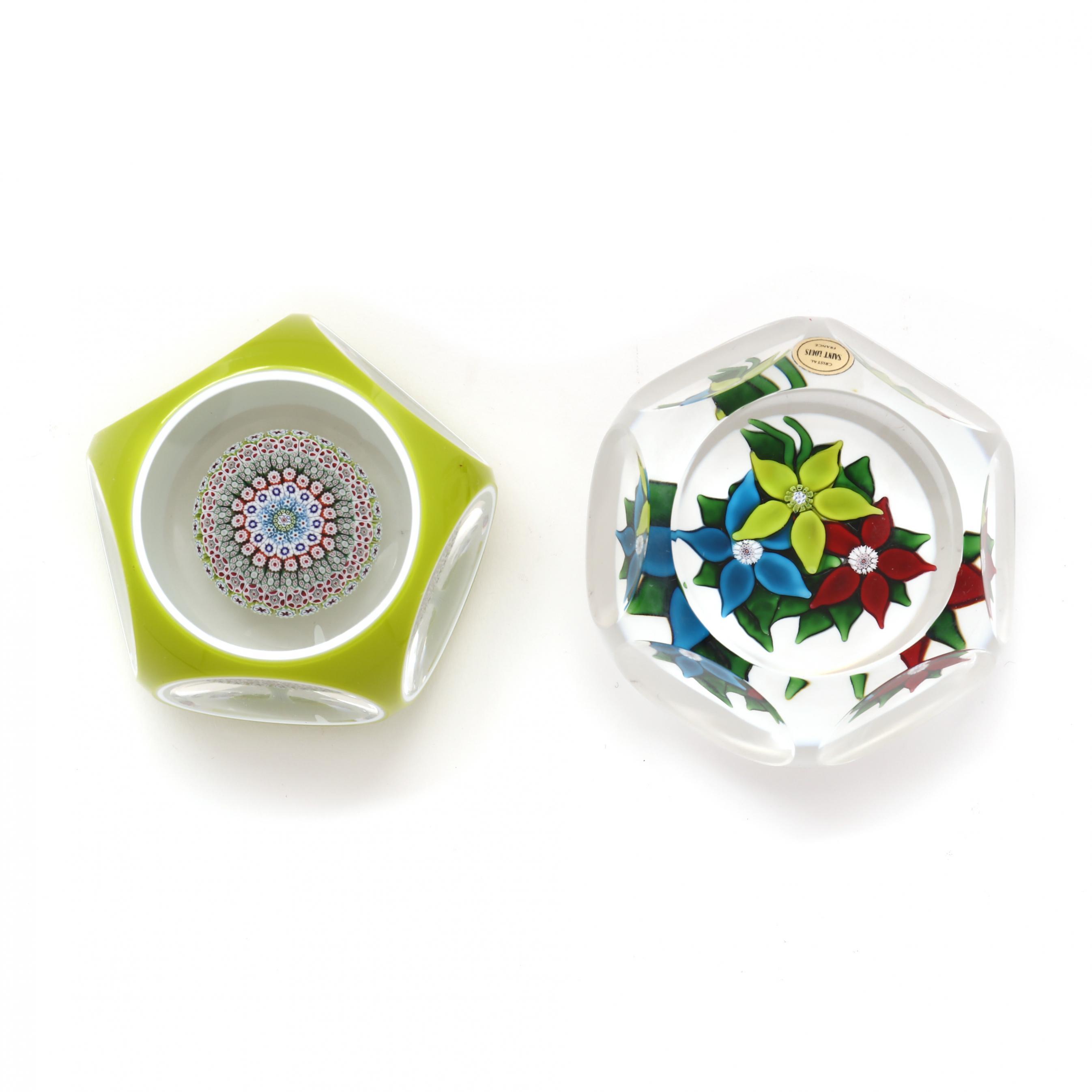 Saint-Louis paperweights, left: stamped 1970, right: stamped 1971.
Saint-Louis, or The Compagnie des Cristalleries de Saint Louis, was founded in 1767 in Lorraine, France. They began producing paperweights in 1845 using a specific glass technique attributed to Murano glassmakers that is thought to have originated during Roman times. Saint-Louis went on to produce paperweights for about 15 years until they experienced a lull in demand. However, in the mid 20th century, stylish collectors brought these paperweights back to the forefront as a sought after collectible, and Saint-Louis resumed production and became known for their multifaceted designs, allowing the viewer to peer in from all angles to experience the art within. 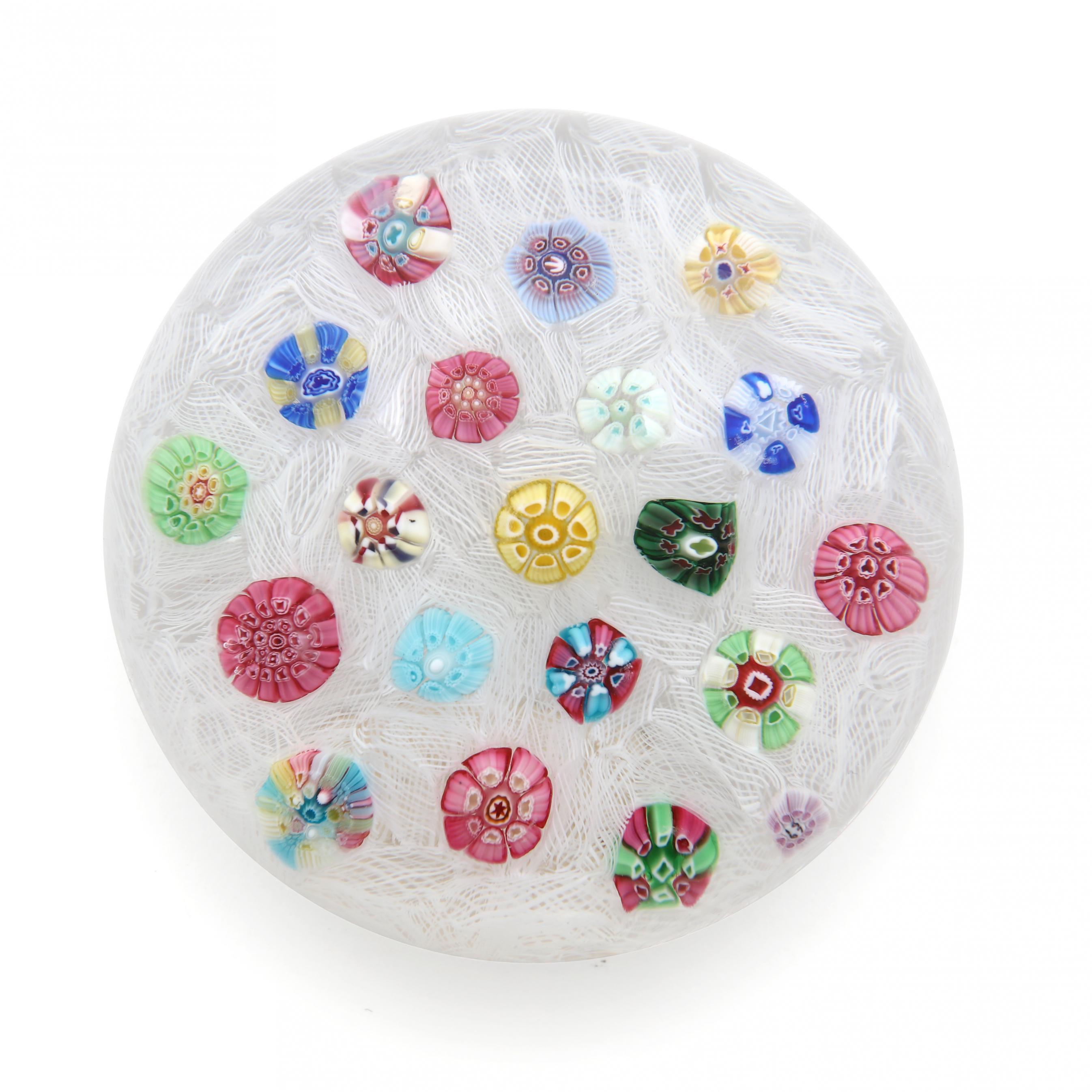 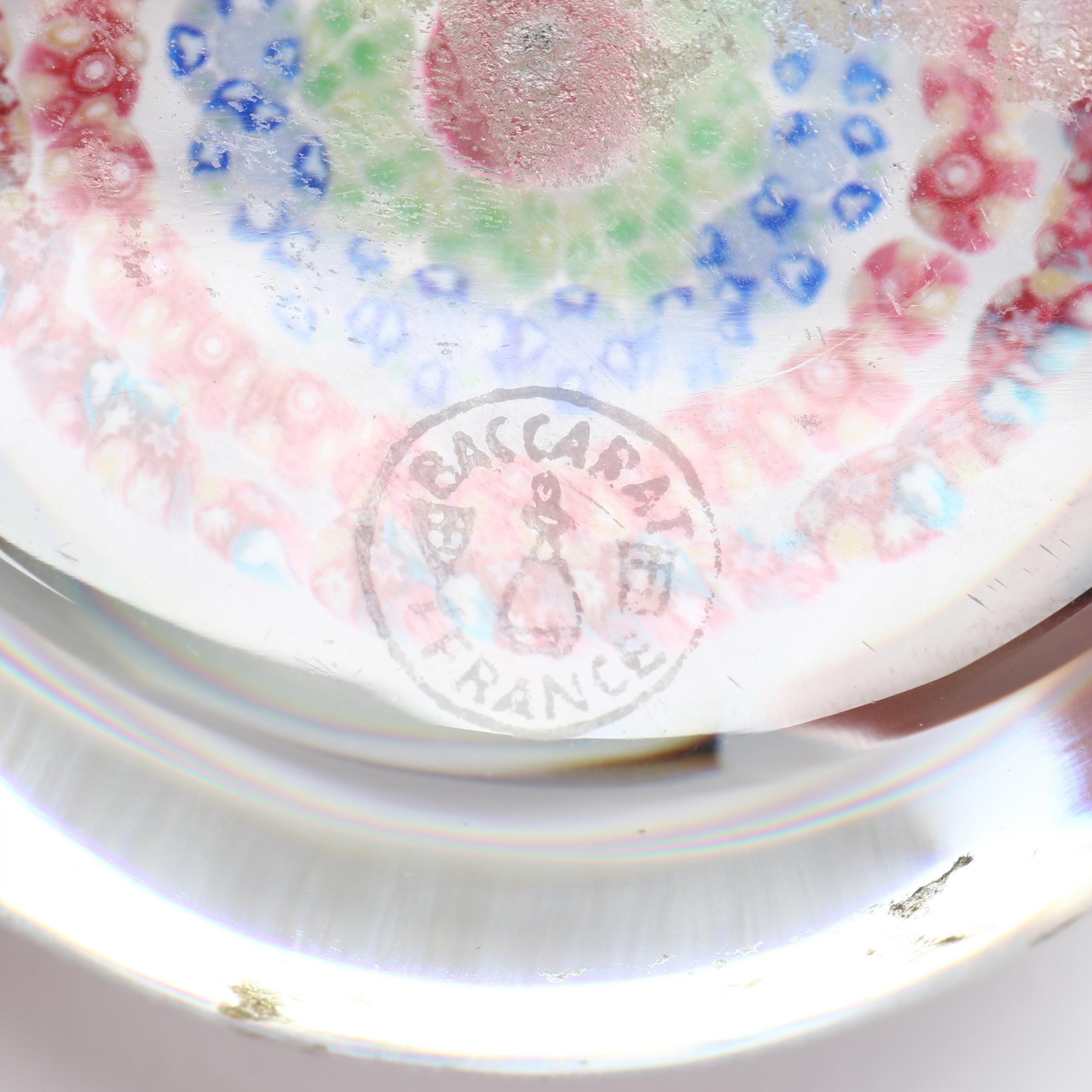 Mark of Baccarat paperweight
The 18th century French firm Baccarat began making paperweights in late 1845, following the example of Saint-Louis. Baccarat paperweights are recognizable for their intricate millefiori set against a white silhouette pattern. It is said that Baccarat’s glassmakers were inspired by a young boy’s cut paper silhouettes and incorporated the concept into their designs. Baccarat excelled at meeting the need for beautiful yet functional desk accessories and continues to do so today.
Explore these fine examples of paperweight craft and more in our upcoming June Estate Auction. 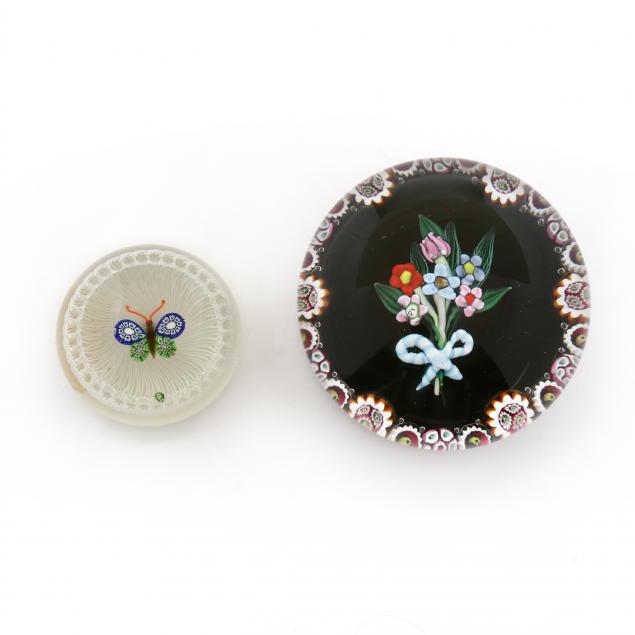 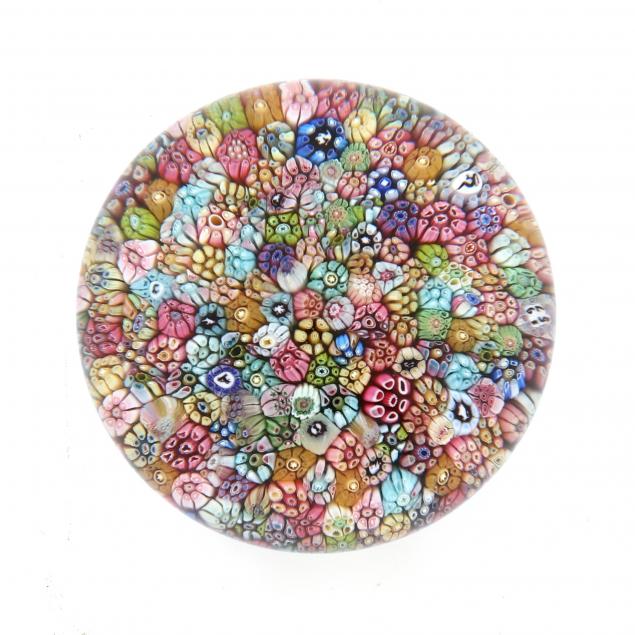 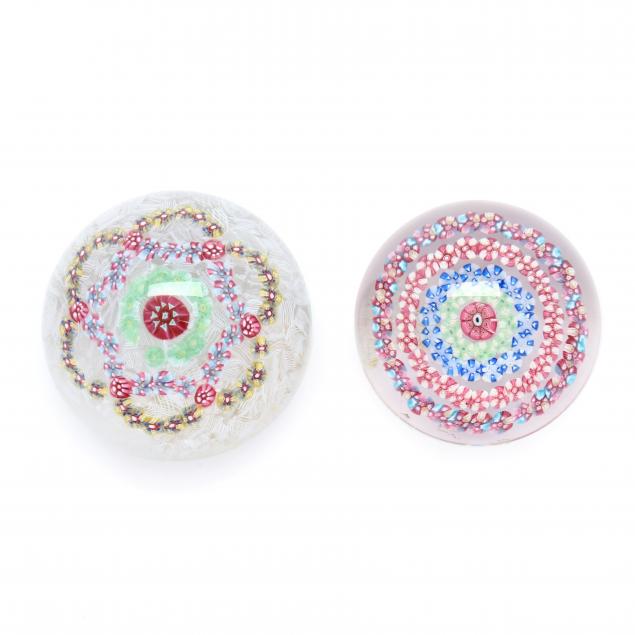 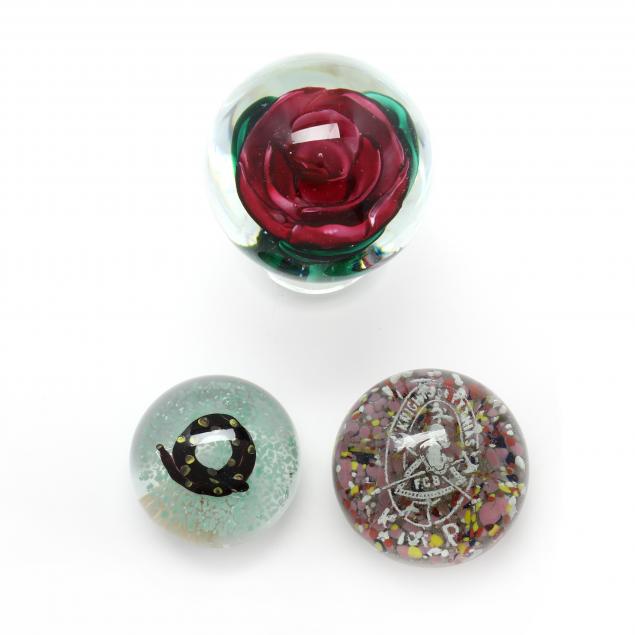 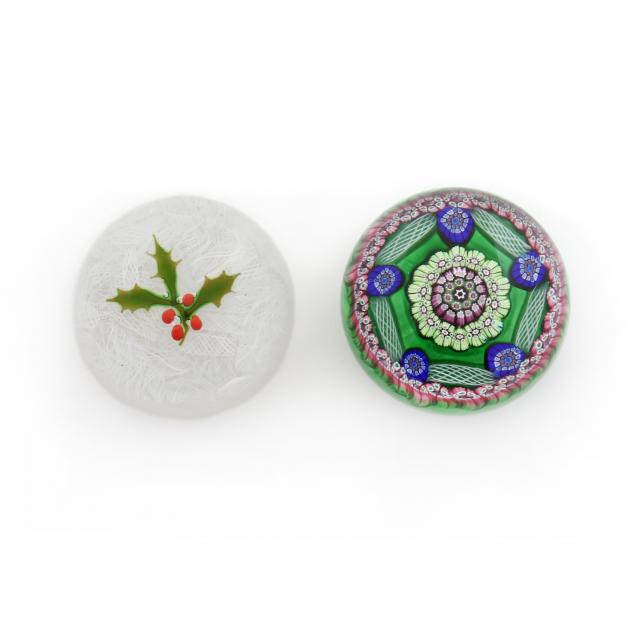 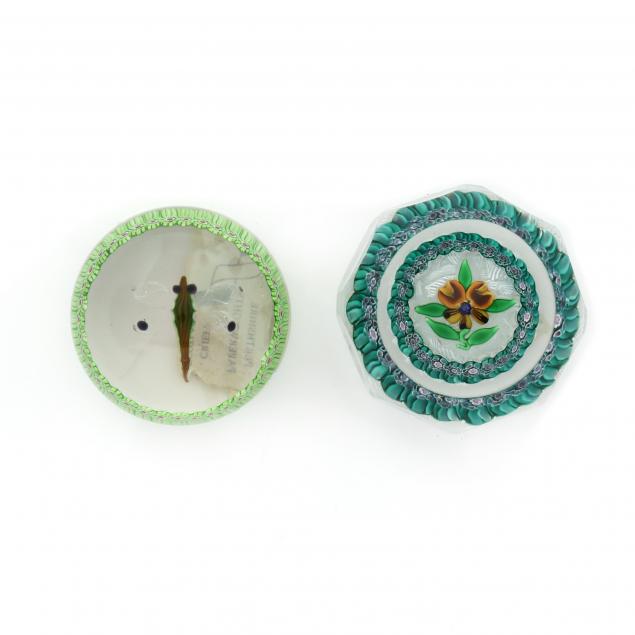 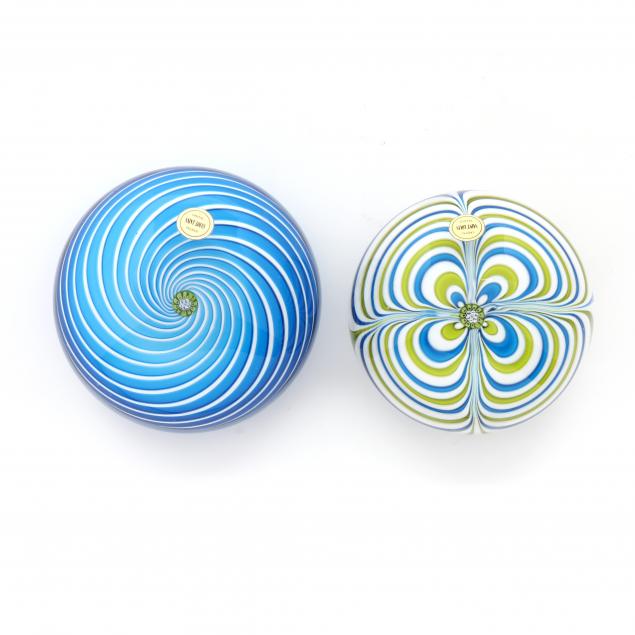 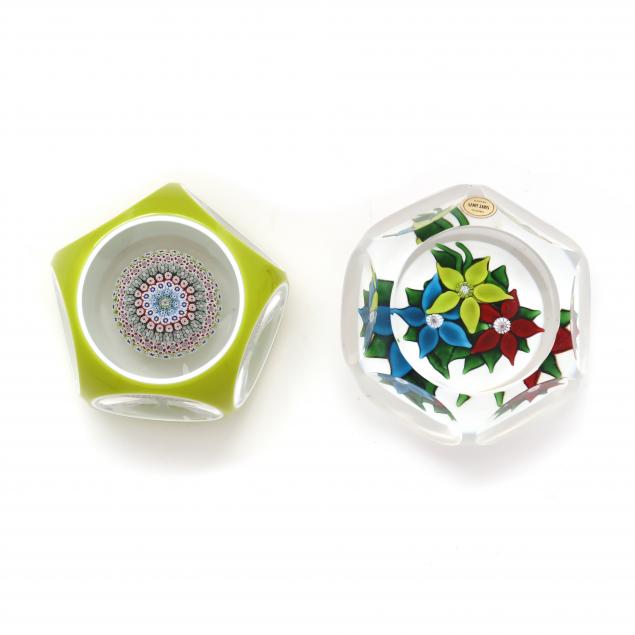 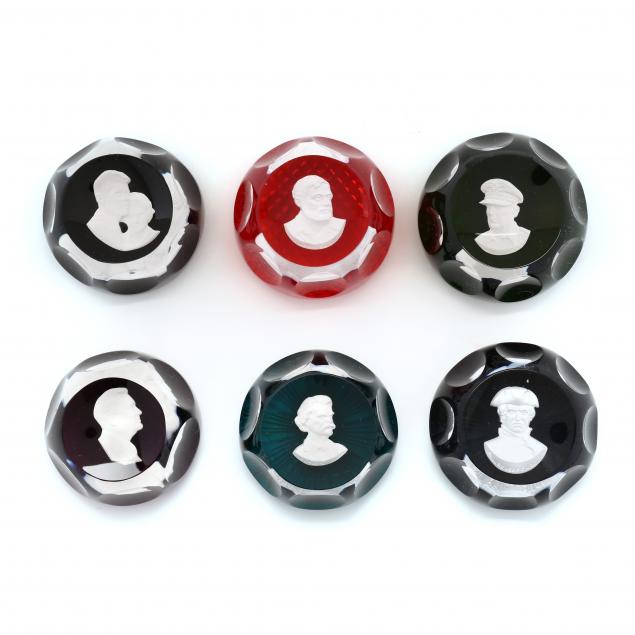 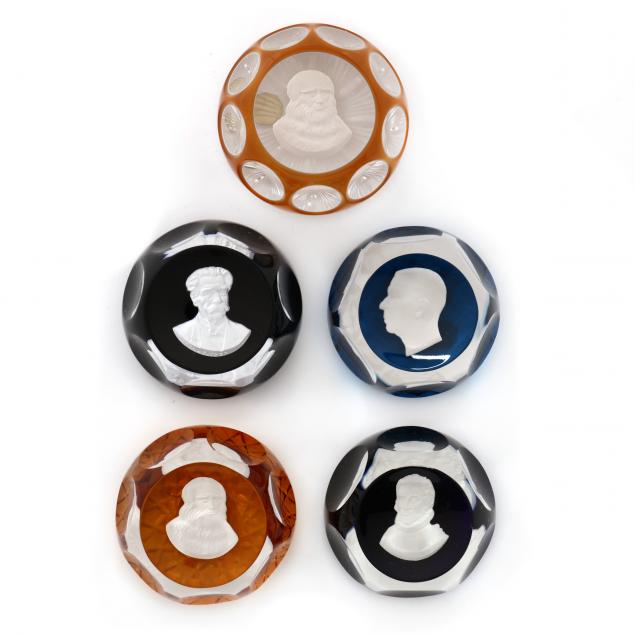 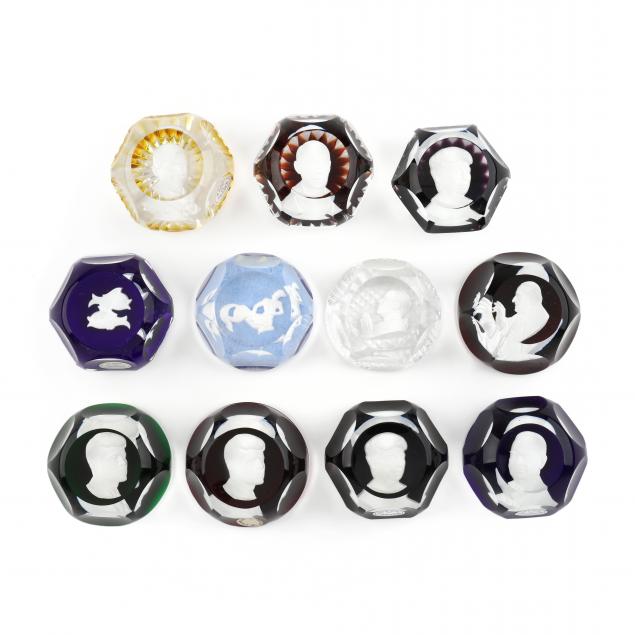 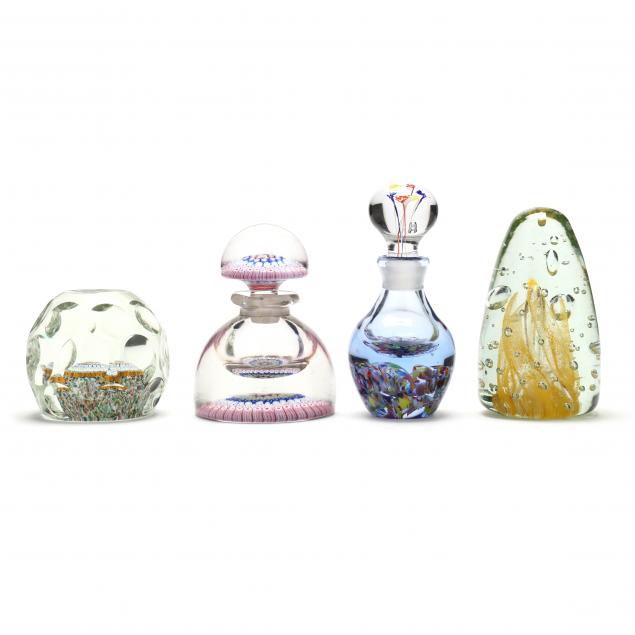 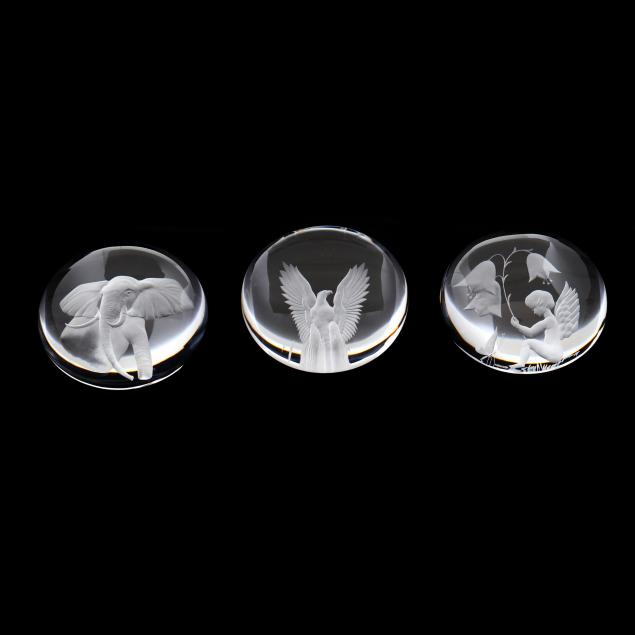 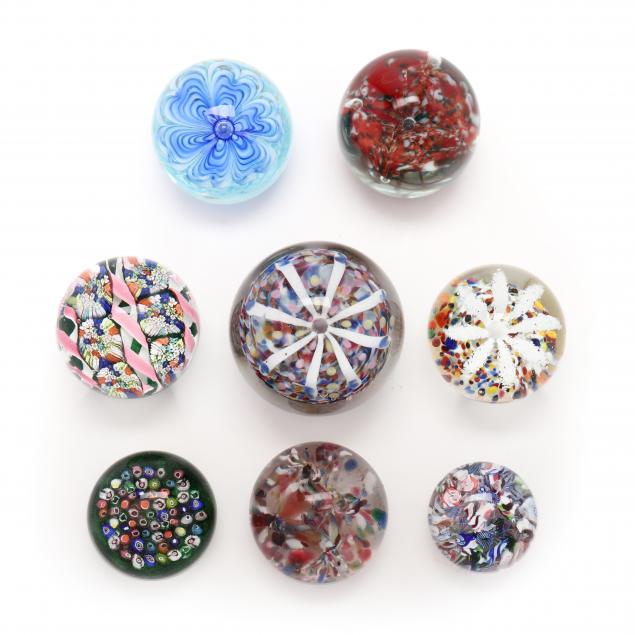 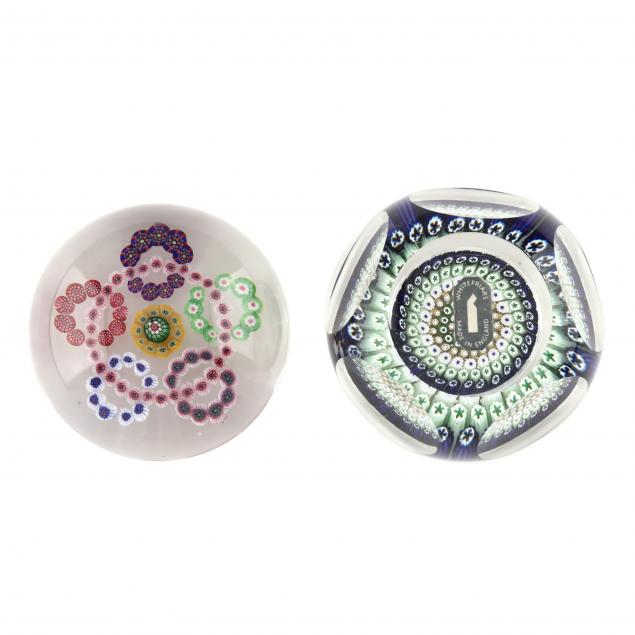