The name "Stickley" is American furniture shorthand for all things Arts & Crafts. It belonged to five brothers from Wisconsin, all of whom made simple, honest wood furniture their life's work. One brother in particular, Gustav Stickley, was almost solely responsible for introducing the United States to the ethos of the English Arts & Crafts movement and, through his furniture, giving it a uniquely American viewpoint. Our New Year's Day Auction included a selection of furniture in Stickley's signature aesthetic.

As it goes with pioneers in almost any field, Stickley's approach to furniture went much deeper than just pleasant home decor. It was the end product of an entire life philosophy that incorporated a lot of environmental conservation, a little socialism, and simplicity in all things. Below are a few things to know about Gustav Stickley that help understand how he both arrived at and lived his personal ideals.

Stickley had a fairy tale youth, but not the good kind.

Think Brothers Grimm, not Disney: Gustav Stickley overcame his share of adversity in his childhood and adolescence. Stickley was born in 1858, the oldest of 11 children of German immigrants. Stickley had to drop out of school after eighth grade to help provide for the family by working in his father's masonry business, which he hated. Then, at 18, Stickley became head of the family after his father, who had been an alcoholic for years, finally left them. At this point Stickley's mother moved the family from Wisconsin to New York to live with her brother. Gustav went to work in his uncle's chair factory, the first step on the road towards his life's work.

Stickley's story took a more romantic turn when he met his wife, Eda Ann Simmons. As a teenager, Eda's father sent her to a convent when her mother died. It's not clear how Gustav and Eda became acquainted, but their relationship developed through letters exchanged via the convent's milkman. Then one September morning in 1883, that same milkman help Eda sneak out of the convent to marry Stickley - a real life fairy tale courtship if there ever was one.

Stickley's path to furniture icon was a winding one.

One might think that once Stickley went to work for his uncle, it was a straight road to his ultimate success. But Stickley made several employment stops along the way. He and two of his brothers started their first furniture company the same year he married Eda, which they ultimately dissolved. Stickley then went to work in a completely unrelated capacity as the Vice President of the Binghamton, NY Street Railroad. He found his way back to furniture as the Director of Operations at New York State Prison in Auburn, where he employed convicts in making simple chairs to be sold to the public. It's speculated that Stickley may even have constructed the first electric chair, which was invented and used for the first time at the Auburn prison during Stickley's tenure there.

After his time at the prison, Stickley took on and left behind a series of different partners in his furniture enterprises until he ultimately had sole control of a company called United Crafts, and then Craftsman Workshops. This was absorbed by his brothers' company, L. & J.G. Stickley, in 1916. The modern Stickley furniture company derives its inspiration from the work of both Gustav and his brothers.

Stickley's magazine The Craftsman was the voice of the American Arts & Craft movement.

In 1901, Stickley published the first issue of The Craftsman, a magazine dedicated to the philosophy of sustainable (an anachronistic term that nonetheless applies), handcrafted goods, in which Stickley could also promote his furniture. The first several issues of the magazine focused on the English originators of Arts & Crafts, William Morris and John Ruskin. Subsequent issues branched much further out - ultimately the publication covered topics as diverse as how to make curtains, art theory and history, and why the United States needed a third political party dedicated to conservation and economic equality.

The topics covered in The Craftsman seem, from a 21st century vantage point, uncannily prescient and enduringly relevant. Even before women got the vote, Stickley (along with his female editor, Irene Sargent), was publishing articles on how well-suited women were to running farms. He advocated for "a square deal" for laborers, environmental conservation, and plenty of outdoor recreation for adults and children alike as the preventative to most vices. As familiar as his furniture designs have become, it's really in the farsighted pages of The Craftsman that Stickley created his philisophical legacy.

In 1908 Gustav Stickley and his wife began buying up 650 acres of farm and woodlands. On it they built Craftsman Farms, which was to be the ultimate realization of Stickley's Arts & Crafts dreams. He intended to turn it into a farm school for boys, and to that end planted orchards, vineyards and vegetable gardens, and farmed cows and chickens. The produce from the Farm was served at the restaurant attached to his furniture showroom in New York City. The centerpiece of Craftsman Farms was an enormous log cabin Arts & Crafts house, meant to be the gathering place and dining hall for the school, with a temporary apartment upstairs for Stickley and his family. Before Stickley could ever get his school off the ground, however, changing popular furniture tastes, combined with an economic decline and the shadow of WWI, sent him into bankruptcy. He was forced to sell Craftsman Farms. But while the surrounding acreage has been whittled down to 30 from the original 650 acres, the log cabin remains - it has been restored and is regarded as one of the most important Arts & Crafts structures in the United States. 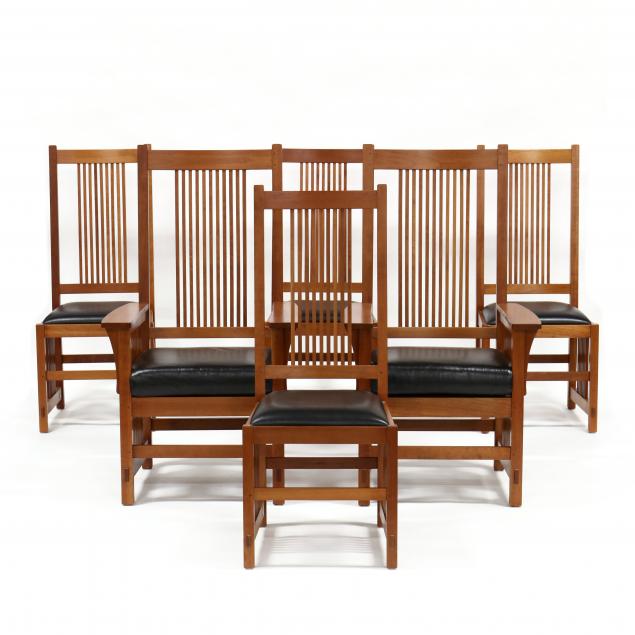 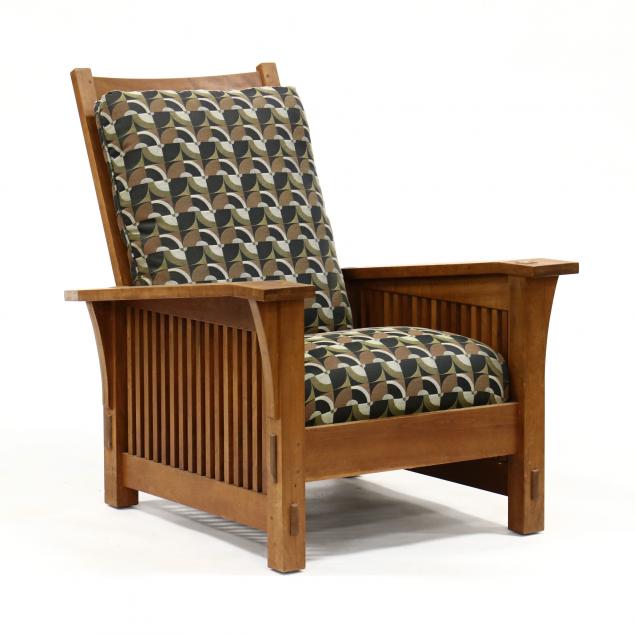 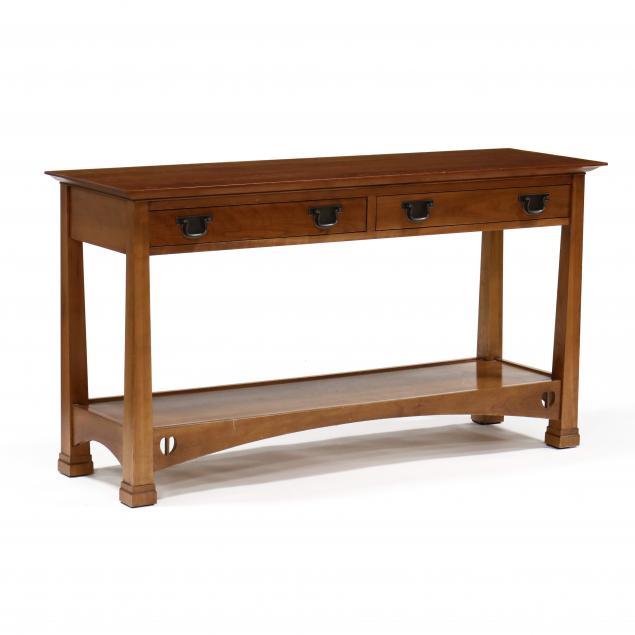 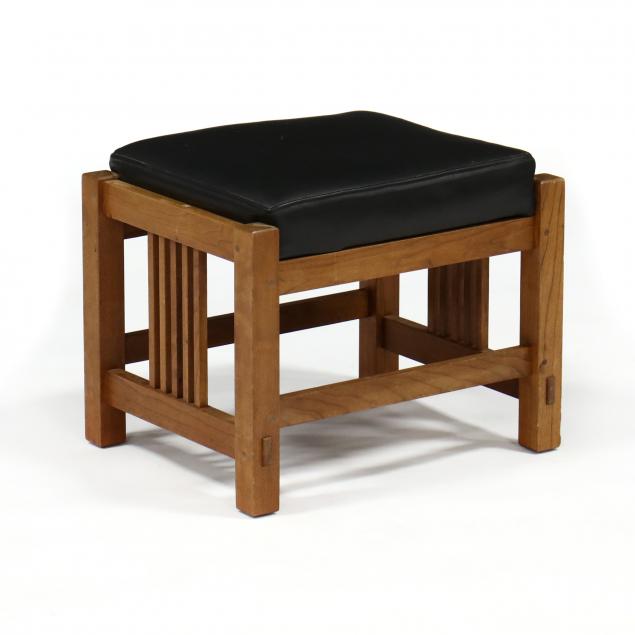 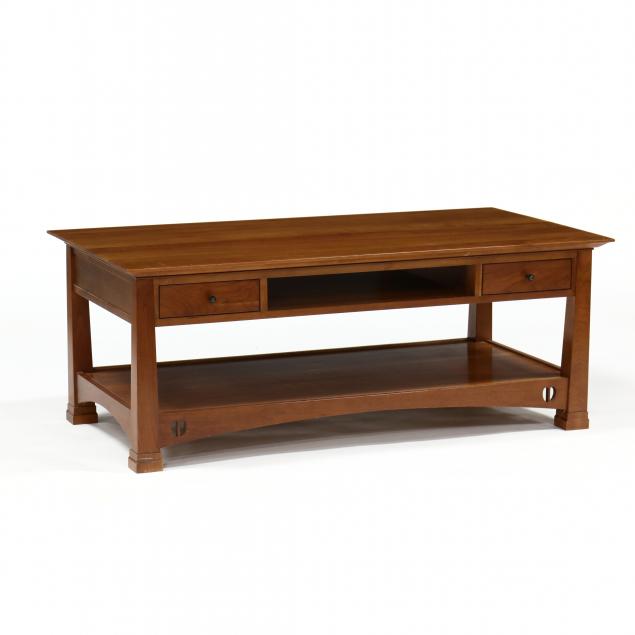