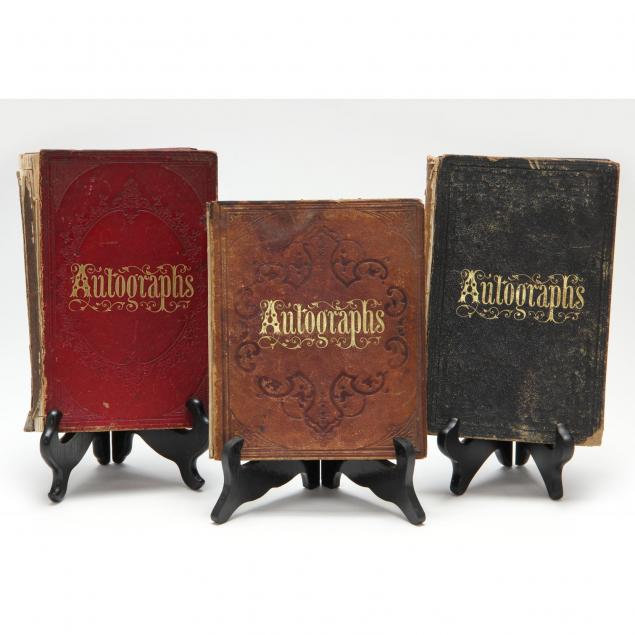 Lot 414
Three Important Confederate Autograph Books From UNC-Chapel Hill
Lot Details & Additional Photographs
Compiled in the early 1860s by brothers John Grant Rencher (1840-1909) and William Conway Rencher (1842-1901). The Rencher brothers, both of whom served as Confederate officers, were the sons of Abraham Rencher (1798-1883), a distinguished public figure and owner of Greenbrook Plantation near Pittsboro, North Carolina. The elder Rencher served in the U.S. House of Representatives for many years, was appointed Charge d'Affaires at the U.S. Embassy in Portugal and finished his political career as Governor of New Mexico, 1857-1861. His sons, though North Carolinians by birth and upbringing, both name Santa FeÂ´, New Mexico as their residence in these autograph albums, two of which are John's with the third one belonging to William. All three volumes are blank page octavo books such as were all the rage during the third quarter of the 19th century. The pages are inscribed by approximately 300 students, most of whom were members of UNC's Dialectic and Philanthropic Societies between the years 1859 and 1863. The entries often contain a wealth of information about the signatory, including their hometown, birth date, course of study, and, often, their sweetheart's name. North Carolina's leading families of the day are well-represented in these pages. Prose, sometimes sentimental and often bellicose, is mixed with verse throughout the books. Military rank and unit affiliation, if any, are given once the war begins in earnest. States represented by signatories include Alabama, Arkansas, Florida, Georgia, Illinois, Louisiana, Mississippi, Missouri, North Carolina, South Carolina, Tennessee, Texas and Virginia. Of particular interest are a later researcher's discreet pencil notations associated with many of the entries. These often mention a given student's fate during the Civil War. Sample entries are as follows: George B. Johnston of Edenton, NC is noted as having been a Captain in the 28th North Carolina and an A.A.G. in Lane's Brigade. He died of consumption in 1864; David W. Simmons of Paradise Point, NC believes in "Law and fighting Yankeys; Richardson Mallett of Chapel Hill, NC studied medicine, became a 2nd Lieutenant in the 1st North Carolina and was killed by deserters in 1863; T. G. Skinner of Hertford, NC writes, "War now. Law or Sailor after the war."; medical student R. A. Stancill of Carrolton, MS "died in hospital in Goldsboro"; William B. Whitfield of Jefferson County, FL was a regular fire- eater, writing,"Down with the Black Republicans The South now & forever."; James B. Moore of Granville County, NC lists his course of study as "war only to promptly die of camp fever before 1861 was through. He was a member of the Orange Light Infantry; William Kenan of Kenansville, NC declares his course of study to be "Law & war" and puts forth "Fight bravely for the South" as his personal motto; Edward A. J. Nicholson of Halifax County, NC simply wanted to study law, but was killed at Petersburg in 1865 as a captain in Lane's Brigade; Angus Shaw of Richmond County, NC vows to "Be ever ready to defend the Southern Confederacy right or wrong."; David Barrett of Carthage, NC advises William Rencher to "...immortalize yourself by killing Yankees...." And so it went while war fever ran hot among a student body anxious to get into the fray.

These autograph books conveniently afford the historian a one-stop glimpse into the lives, aspirations and demographics of a large group of University of North Carolina students during the Civil War years.

The covers of all three books lack outer spines while showing heavy wear and chipping; the front cover of the William Rencher book is disbound; internally the endpapers are somewhat browned with some foxing; internally, however, the pages are much brighter, being lightly toned and largely free of the environmental damage that so often plagues Southern paper. This set is worthy of being professionally rebound with archival materials. 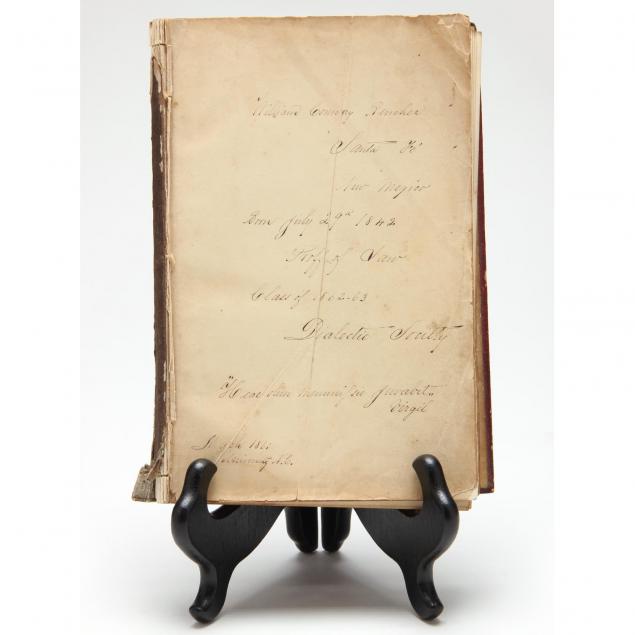 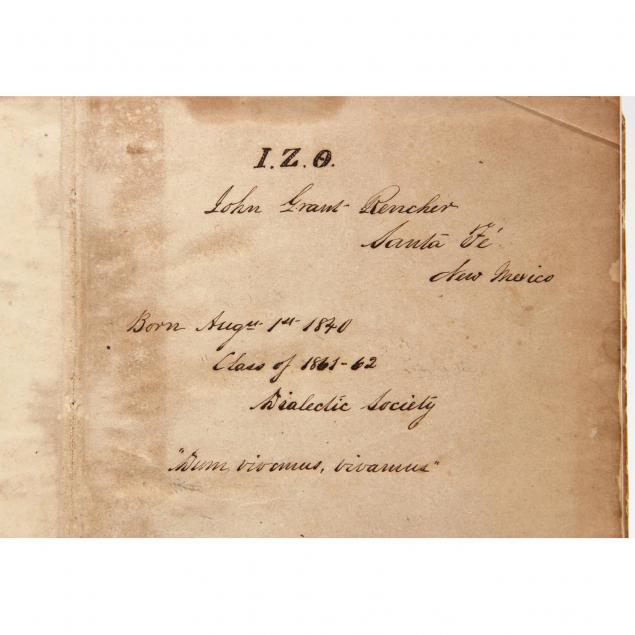 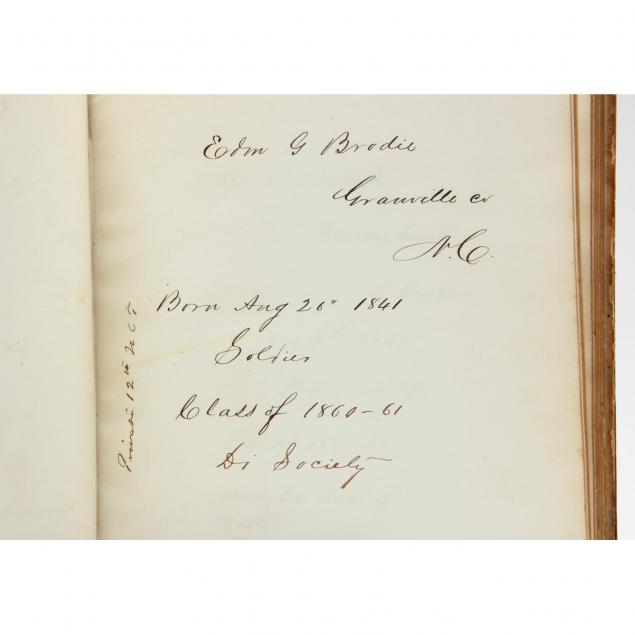 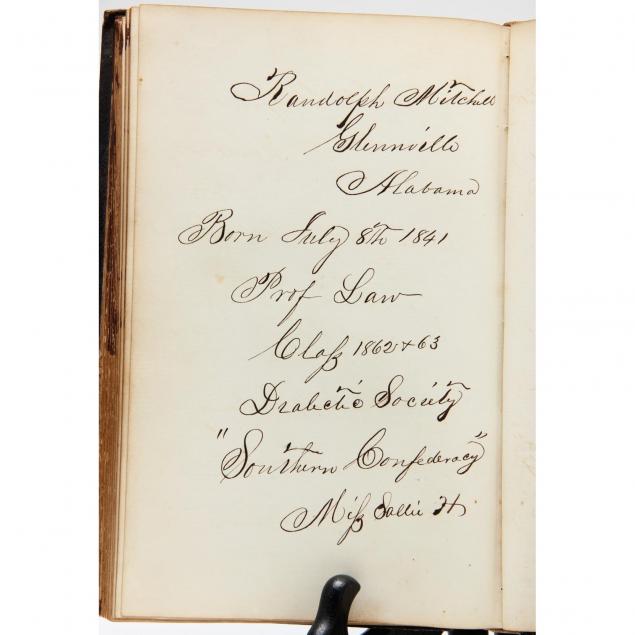