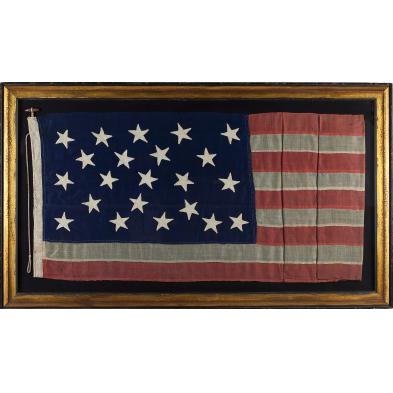 Lot 601
Rare 22-Star United States Flag for Alabama
Lot Details & Additional Photographs
Circa 1819, hand stitched throughout, wool with cotton stars applied to both sides in five rows, the canvas heading is threaded with a rope secured by a wooden toggle and is inscribed "Presented to Capt. C. H. Beckshafft by W. H. Ball," folded to fit in a modern painted wooden frame, 42 x 72 in., the flag itself being 42 x 97 in. The flag's recipient, Captain C. H. Beckshafft, served the Union during the Civil War as a junior officer aboard the "Malvern," the "Release" and the "Yantic."

This flag was examined by Whitney Smith, Ph.D. of the Flag Research Center in Winchester, Massachusetts. Dr. Whitney's letter authenticating the flag is included with the lot and states, in part: "...Alabama was the 22nd state, admitted to the Union on 14 December 1819. However, Maine was admitted as the 23rd state on 15 March 1820 and, in accordance with the then existing flag law, the stars for both Alabama and Maine were officially added to the United States flag on 4 July 1820. Therefore there never was an official 22-star flag. There is nothing in the item at hand to suggest that any alteration was made in the flag subsequent to its initial construction. Therefore there is a strong presumption that the flag was made at the time when Alabama was a state (or about to become a state) and before its star was added to the national flag on 4 July 1820...It is my considered opinion it is an authentic original 22-star United States flag and therefore a valuable item, considering its rarity and condition." 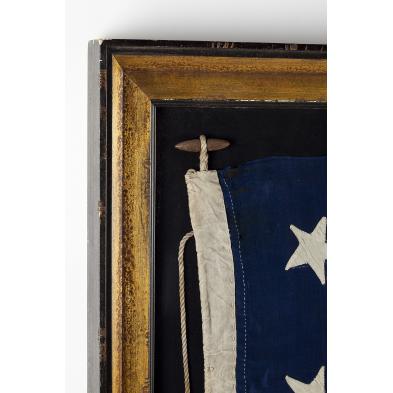 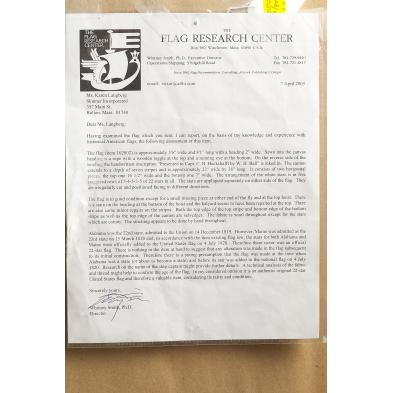