Lot 64
Thomas Sully (PA, 1783-1872), General Jackson
Lot Details & Additional Photographs
Oil on paper laid on board, unsigned, portrait study similar to the final painting completed in 1819 for the Association of American Artists (number 878 in THE LIFE AND WORKS OF THOMAS SULLY by Edward Biddle and Mantle Fielding, Philadelphia: Wickersham Press, 1921) and described as "three-quarter length, in uniform, face front, right hand on hilt of sword, left hand on holster holding reins of a horse." A variation of this image was also engraved by J. B. Longacre and published in November 1820. Presented under glass in a gilt composition frame. Painting 7 11/16 x 6 3/32 in.; DOA 11 x 9 3/8 in.

Another oil sketch on heavy paper of General Andrew Jackson and his horse is documented in the Frick Art Reference Library (call number Sully, Thomas 121-3d). Their records note that it too descended in the Nash/Rhoades family, after being gifted from Mr. William Henry Westray Darley (husband of Jane Sully, daughter of the artist). The record also notes that "two different sketches and one finished oil of the same subject are all in different collections." 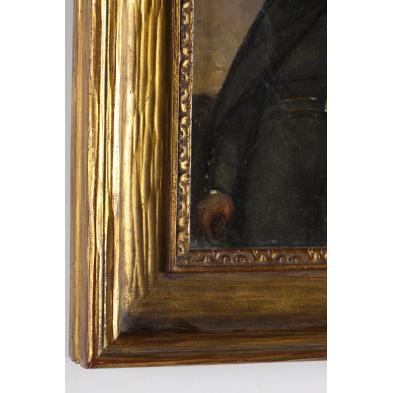