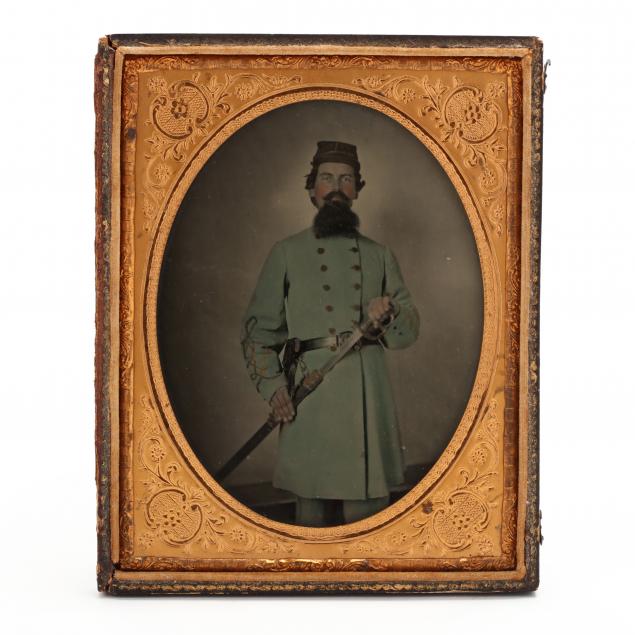 Lot 468
Published Half Plate Ambrotype of a North Carolina Confederate Officer
Lot Details & Additional Photographs
Being First Lieutenant Shemuel Hawkins Kearney, Company "C," 8th Battalion N. C. Partisan Rangers, and, later, Company "D," 66th Regiment N.C. Troops. The subject wears a regulation double-breasted gray frock coat and kepi, both complete with a lieutenant's single row of braid; his belt rig supports a holstered revolver and is secured by a two-piece interlocking belt plate, the face of which is obscured by his half-drawn sword, which is either a federal M1850 foot officer's sword or a Confederate variant. The image has a full color appearance with thoroughly tinted flesh tones, a light blue-gray uniform, and gilt embellishments. It is reproduced in black and white on page 139 of Greg Mast's State Troops and Volunteers (Raleigh: North Carolina Department of Cultural Resources, 1995), a magnificent album of North Carolina military portraits from the Civil War's first two years. Mr. Mast suggests this ambrotype was taken outdoors, instructing the reader to "...notice the sun's reflection off the belt and sword blade." Our detail photos show how this portrait is presented in Greg Mast's compendium. (The book here is from a private library and is not being sold with the image. It is being used for informational purposes only.)

Shemuel Hawkins Kearney (1832-1907) of Franklin County, North Carolina enlisted on July 15, 1862 as a private in the "Davis Partisan Rangers," which later consolidated with other units to form the 66th NC Troops. Kearney was promoted to First Lieutenant on October 25, 1862. He would serve first in Eastern North Carolina before going to Petersburg with the 66th. Illness would strike Kearney in Virginia, leading to his discharge on July 20, 1864.

Presented in half case; excellent tonal quality with good contrasts and strong color; smooth, even surfaces throughout; minor losses to emulsion in the fields that are only visible when the image is removed from its case. 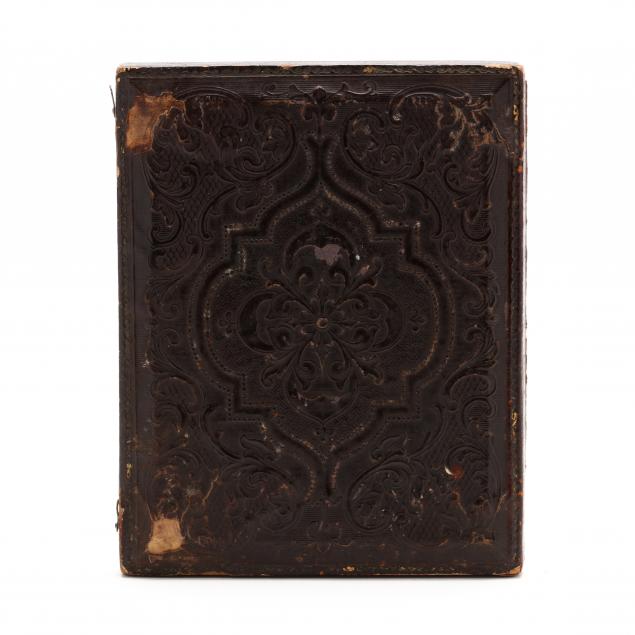