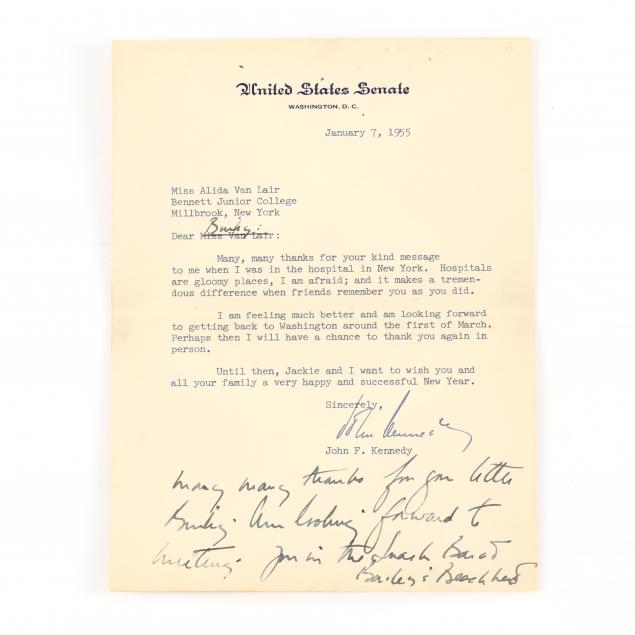 Lot 320
Letters and Ephemera Saved by A Longtime Kennedy Family Friend
Lot Details & Additional Photographs
Comprising a small and private archive compiled by Kennedy friend and confidant Binky Van Lair, its most important item being a Typed Letter Signed "John Kennedy" on a United States Senate letterhead, one page, January 7, 1955, to Miss Alida Van Lair, Millbrook, New York, reading, in full: "Dear Binky: Many, many thanks for your kind message to me when I was in the hospital in New York. Hospitals are gloomy places, I am afraid; and it makes a tremendous difference when friends remember you as you did. I am feeling much better and am looking forward to getting back to Washington around the first of March. Perhaps I will have a chance to thank you again in person. Until then, Jackie and I want to wish you and all your family a very happy and successful New Year. Sincerely, John Kennedy" with an unsigned note below, in Kennedy's hand reading, "Many, many thanks for your letter Binky. Am looking forward to meeting you in the snack bar at Bailey's Beach Club...(on next page) from me." Copies of this form letter were hand-signed by Kennedy and sent to well-wishers as he recovered from his second back surgery. Some of the letters, like this example, were enhanced with a personal note; additional material present includes an empty matchbook dated 1952 from Hammersmith Farm, Newport Rhode Island, a childhood home of Jackie Kennedy's; an undated and unsigned note in Jackie Kennedy's hand accepting an invitation "...for a cocktail party in honour of...Miss Alida Van Laer; an invitation to the 1953 wedding of John F. Kennedy and Jacqueline Lee Bouvier with postal cover and personal note to Binky from the Auchincloss family; a chatty 1954 letter from Jackie Kennedy's step sister Nina Auchincloss Straight; an August 3, 1963 invitation to Hammersmith Farm; an August 23, 1963 thank you note from Jackie Kennedy via the White House Social Secretary for an expression of sympathy; an official envelope "edged in black" and postmarked January 27, 1964 from Mrs. Kennedy, containing a card thanking the recipient for their sympathy following President Kennedy's death; an undated card from Jackie as "Mrs. Aristotle Onassis" with a handwritten note signed Jackie; a December 10, 1976 Typed Note Signed "Jackie; a Autograph Note Signed by Janet Lee Auchincloss, mother of Jackie Kennedy, October 29, 1977.

All items octavo (9 in.) or smaller

By descent from the John Jacob Astor IV family of Rhinebeck, New York, through William Astor Drayton, the father of Countess Margaret (Peggy) Reventlow, philanthropist and patron of services for the blind

Paper with age toning as expected; some paper or glue residue present on some envelopes that were mounted in a scrapbook; the John Kennedy TLS in good condition. 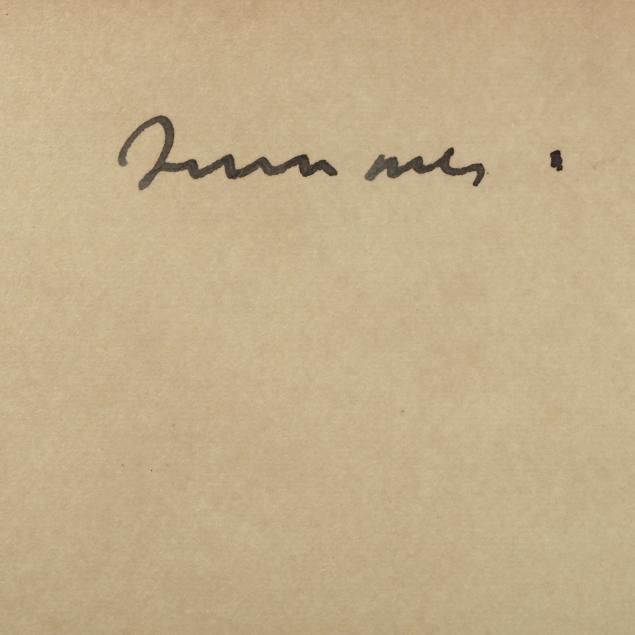 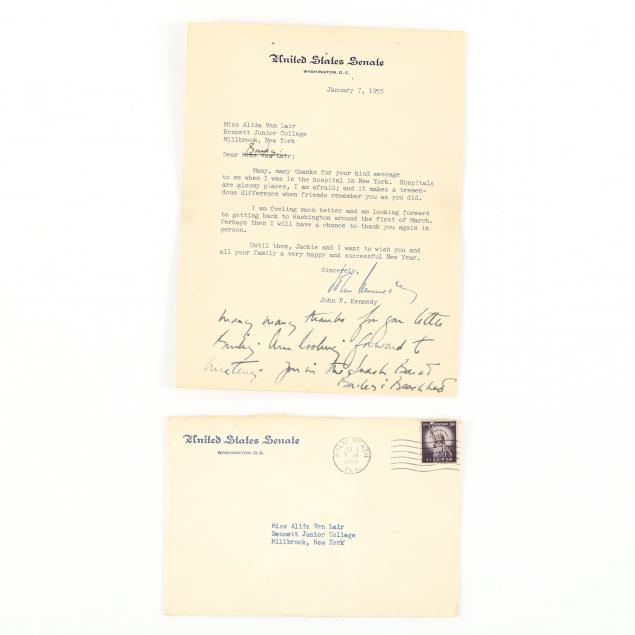 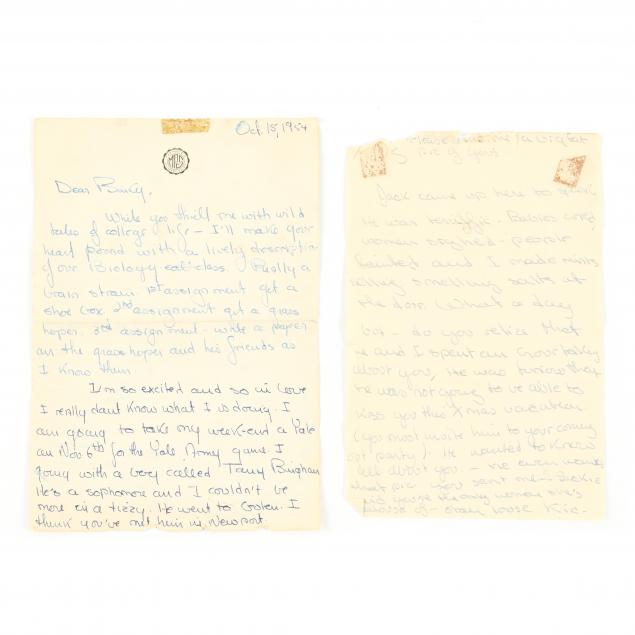 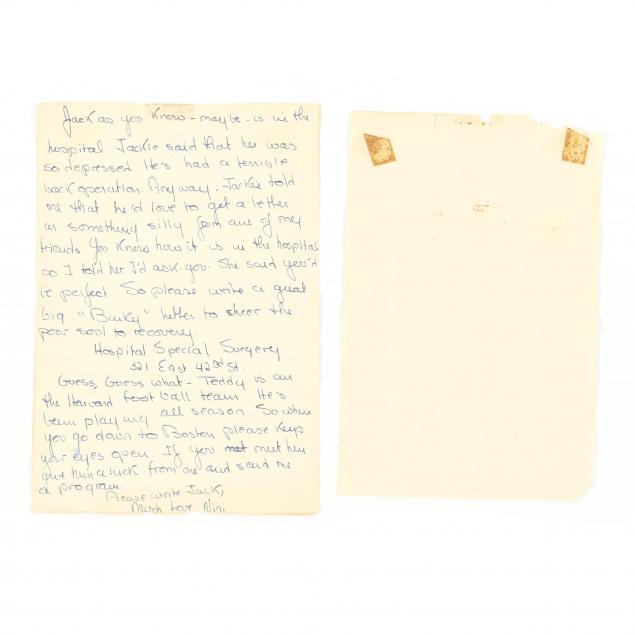 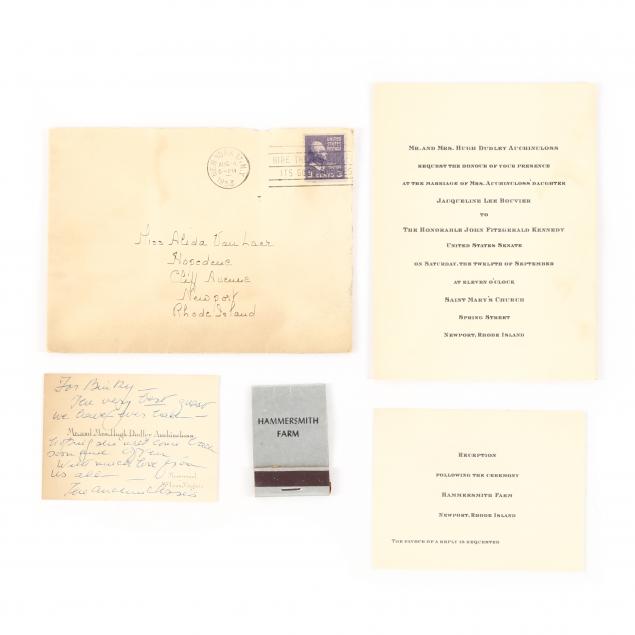 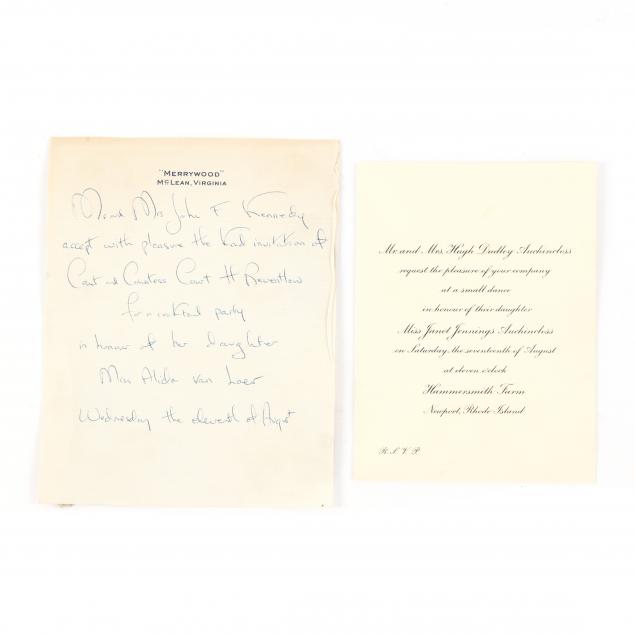 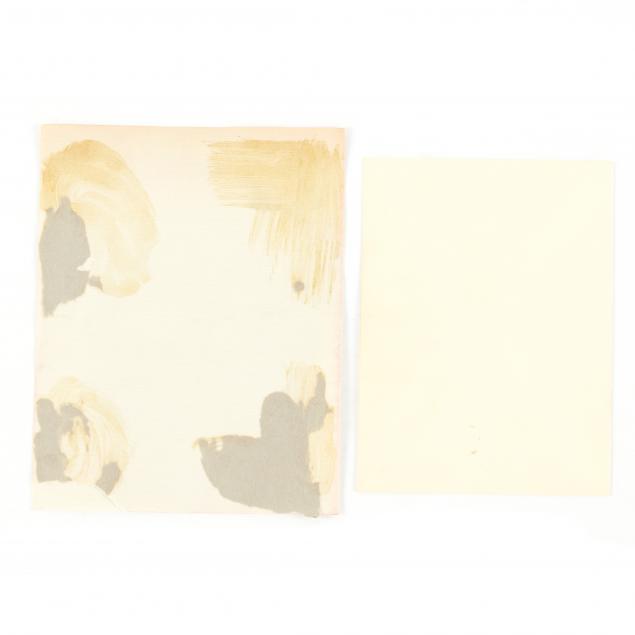 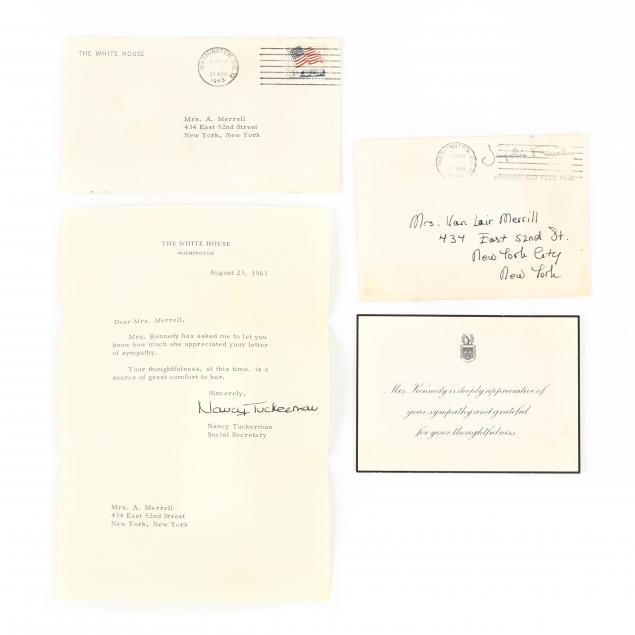 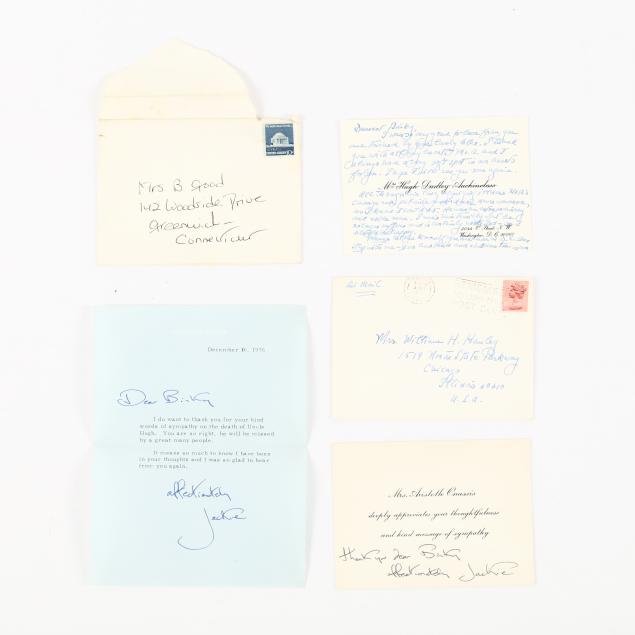 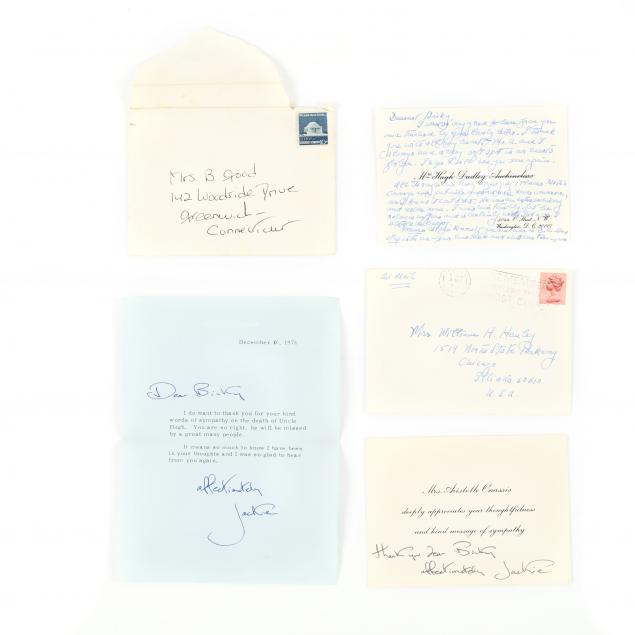 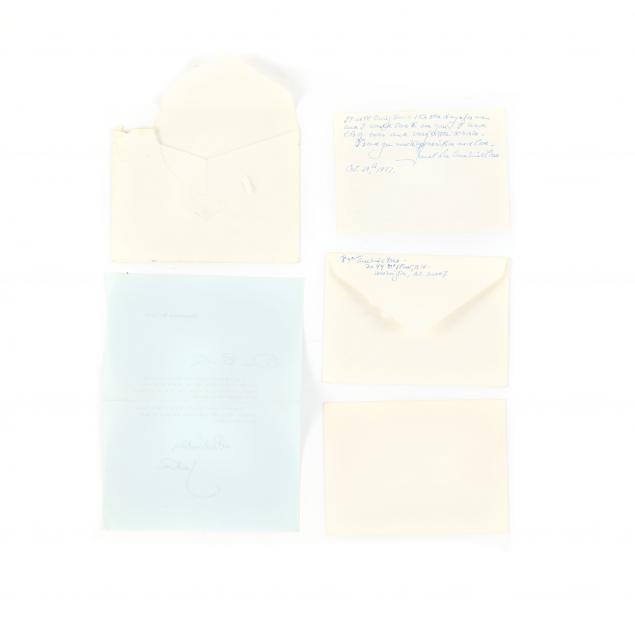