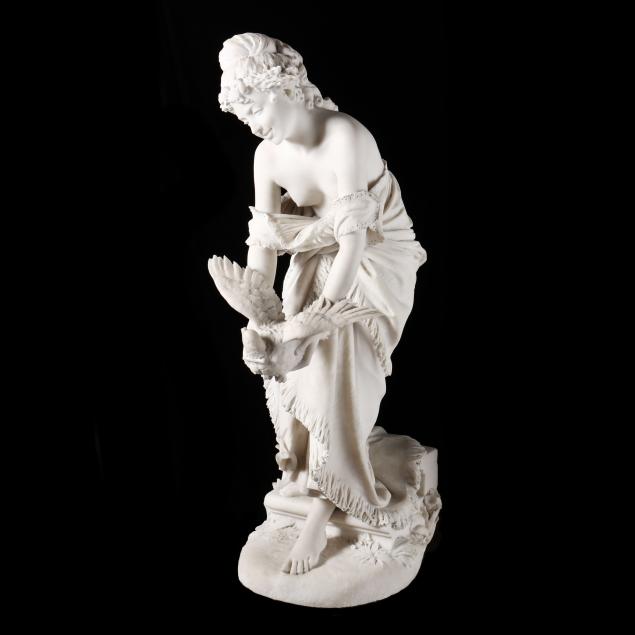 Emanuele Caroni was born in Rancate in 1826. He studied first under Vincenzo Vela, a Swiss born sculptor working in Milan. Caroni then traveled to Florence, where he continued his studies under Lorenzo Bartolini, a neoclassical sculptor favored by Napoleon.

In 1848, Caroni was actively involved in the fighting against the Austrians, for which he was awarded the Cavaliere della Corona d'Italia by King Vittorio Emanuele II. Shortly thereafter, Caroni settled in Florence, where he opened his own studio. He exhibited frequently throughout his career and was awarded gold medals at the 1867 and 1889 Paris exhibitions. The present work was one of three Caroni exhibited at the 1876 Centennial Exhibition held in Philadelphia.

Caroni's skill and talent at pictorial composition and exceptionally fine textures are fully evident in the dramatic figural arrangement and the flowered silk dressing gown of The Telegram of Love. A contemporary critic praised the work in an Illustrated Catalogue of The Masterpieces of the International Exhibition 1876, describing this sculpture as "amused with a lighter and more hopeful subject: this radiant maiden, who confides to the neck of her dove the fluttering message which will lead to a rendezvous of an answer, is tortured by no doubt, crushed by no despondency...all grace, spontaneity, sweetness, and pastoral charm."

Loss to bird's beak; some minor scuffing to edges of bird's wing, possibly original to work; small pock mark to fold of drapery at lower back of sculpture; minor scuffs to leaf and grass at proper left side of sculpture; light surface grime to crevices. 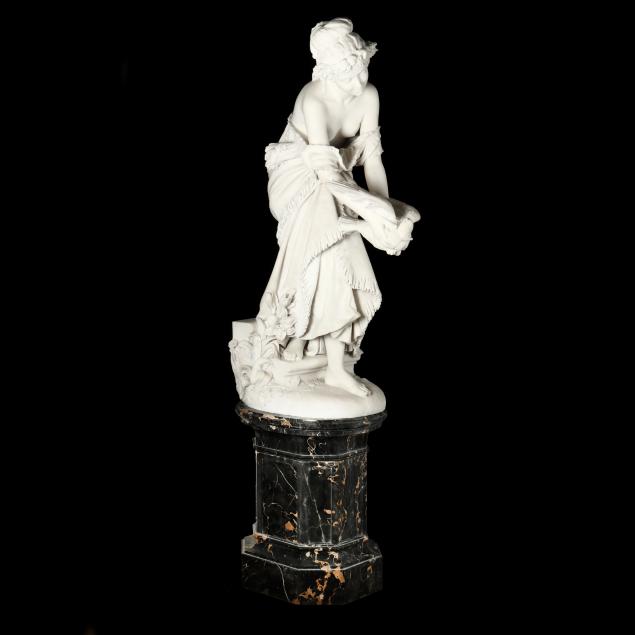 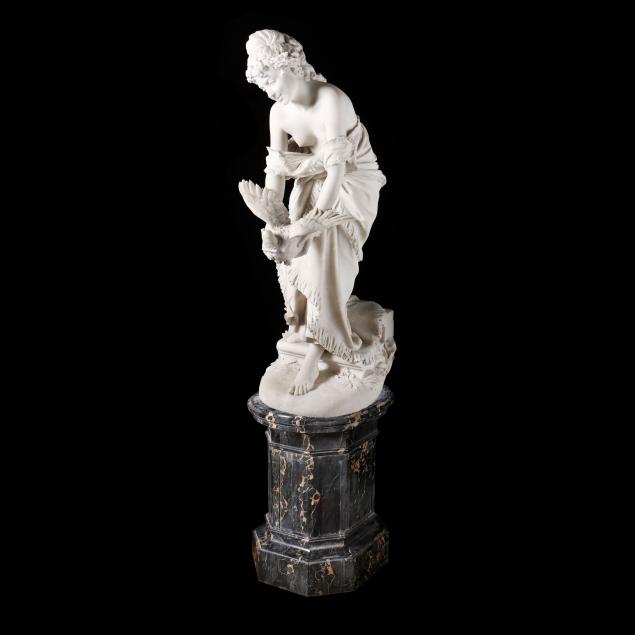 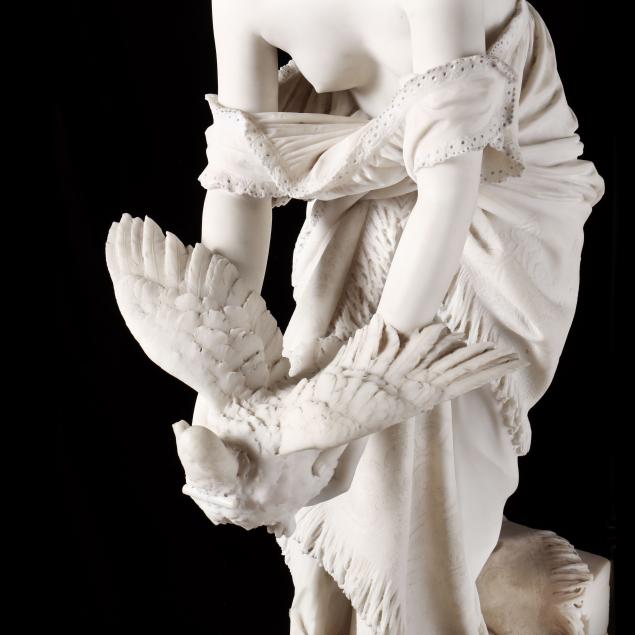 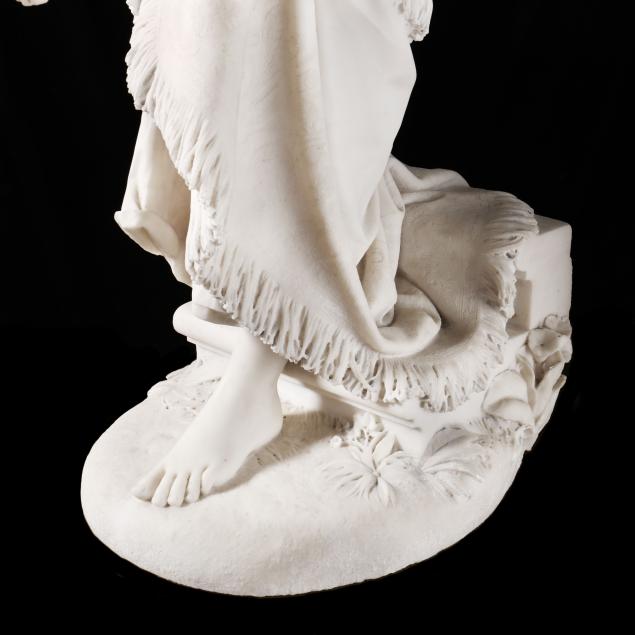 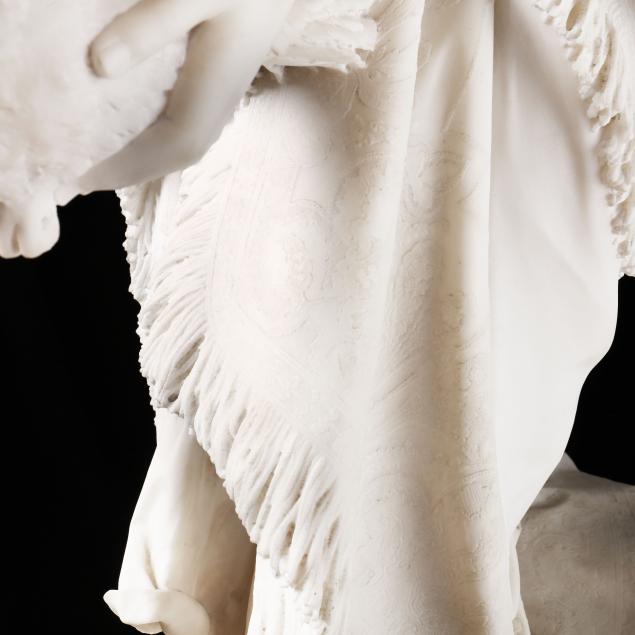 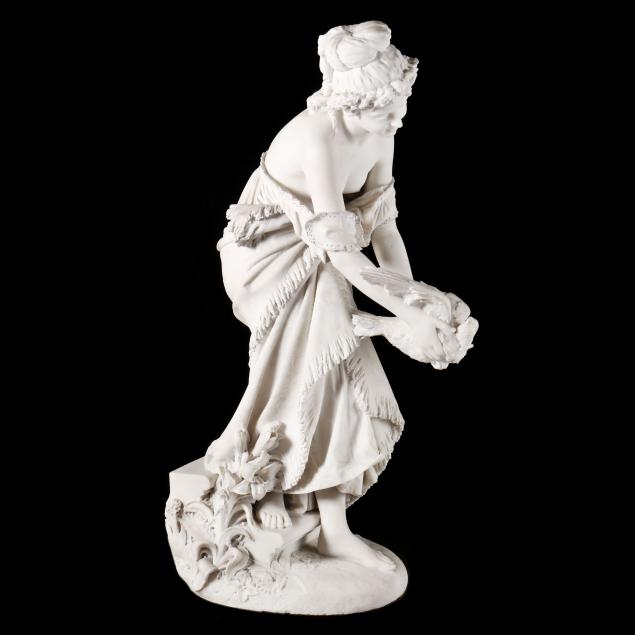 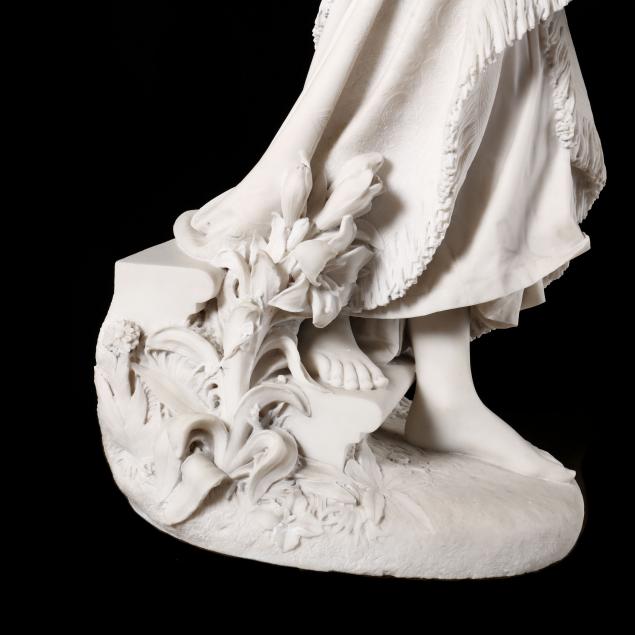 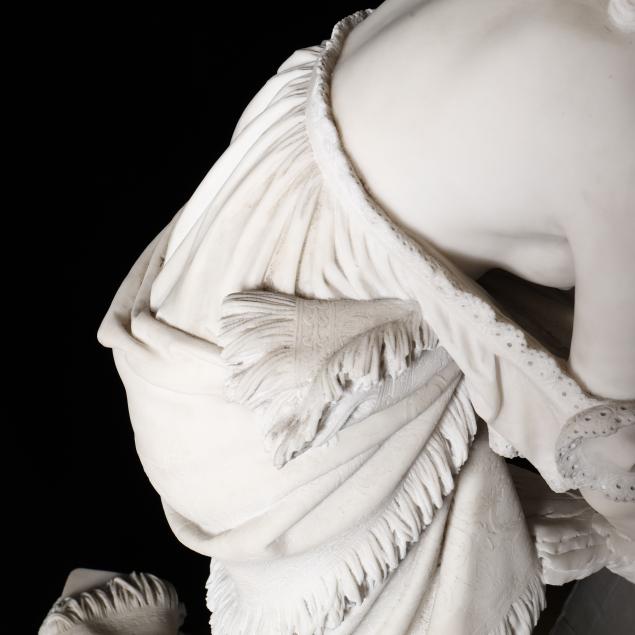 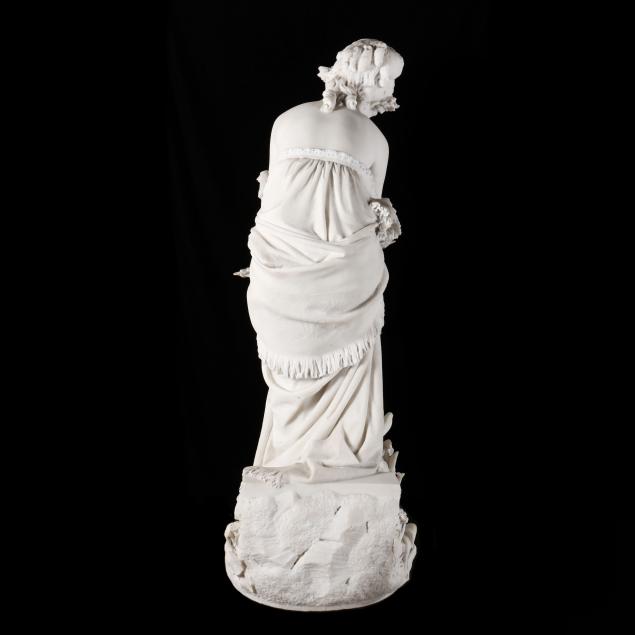 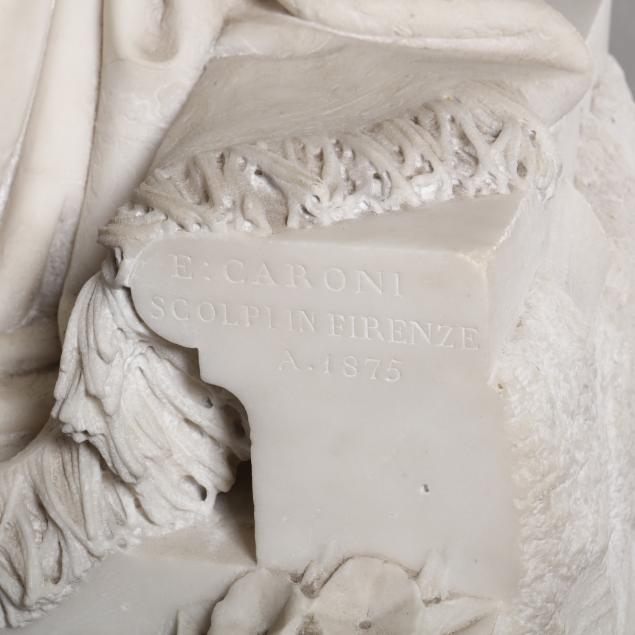 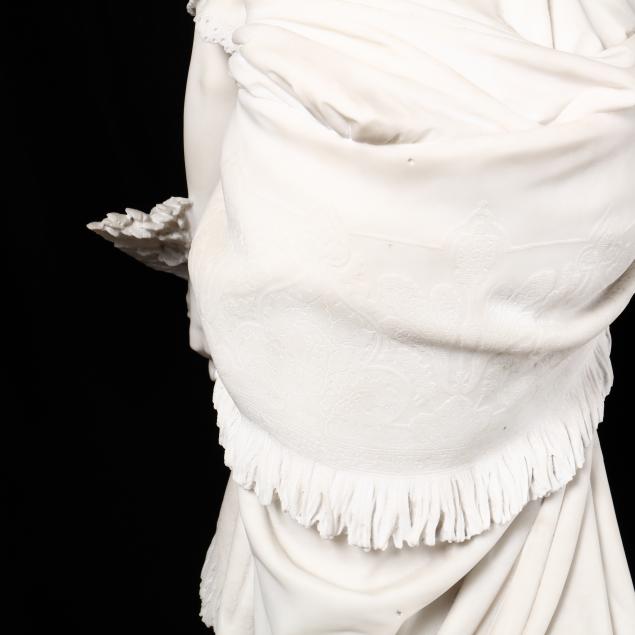 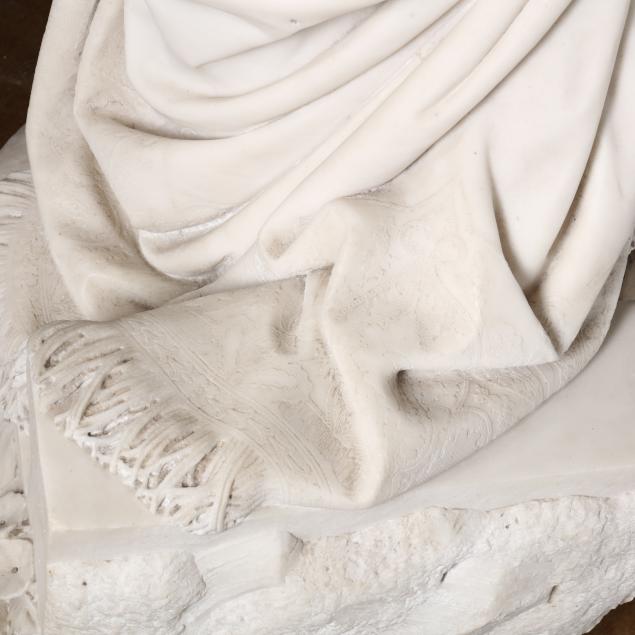 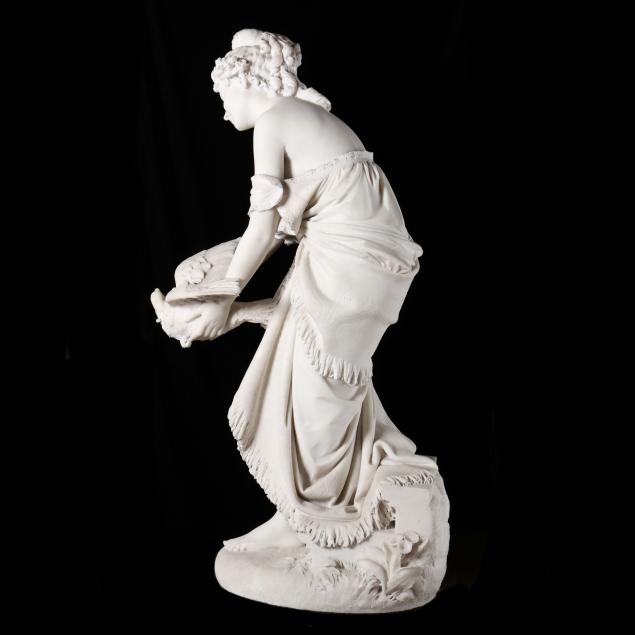 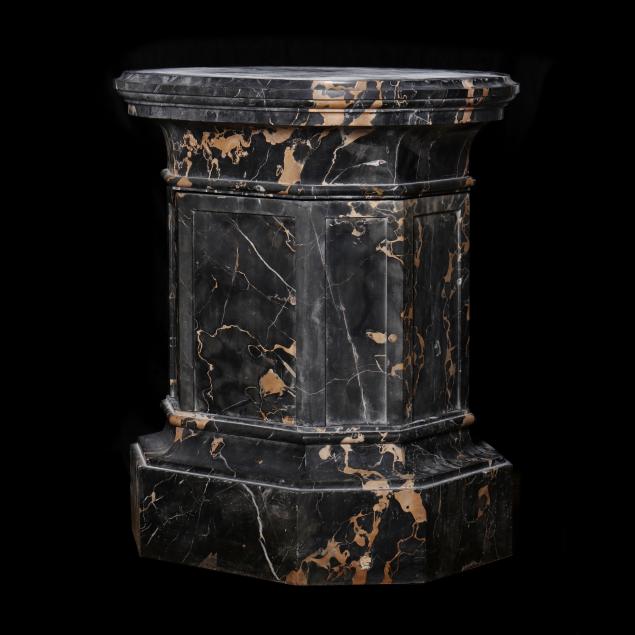 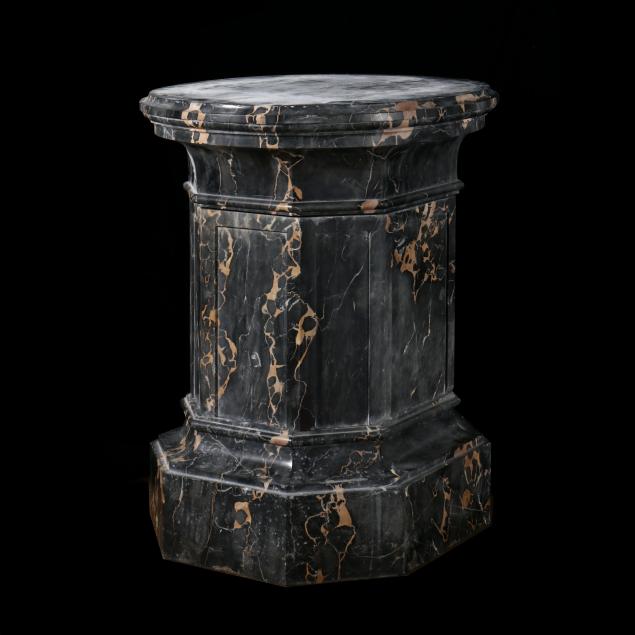